A comedy about price-fixing? It's true 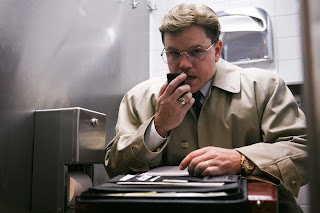 Three cheers for The Informant!, a movie that defies expectation by denying us a rooting interest -- unless it's our wish that sanity might suddenly prevail in what director Steven Soderbergh presents as an intricate web of irresponsibility and corruption.


The lack of a bona fide hero isn't the only improbable thing about The Informant! Who'd have thought that anyone could take a comic approach to a price-fixing scandal involving the amino acid, lysine? But Soderbergh has done it, building a fascinating story around a corporate whistle blower at a major U.S. company, Archer Daniels Midland.


Based on a true story, The Informant! focuses on Mark Whitacre (Matt Damon in an Oscar worthy performance). Unlike Russell Crowe's ultra-serious character in Michael Mann's The Insider, Damon imbues Whitacre with a capacity for naivety and illogical assumption. We're never sure what to make of Whitacre, who calls himself 0014 because he thinks he's twice as smart as James Bond, the mythic 007.

Of course, Whitacre's deluded about his investigative talents; he bumbles his way through situation after situation, violating every bit of advice the FBI gives him.


As the story progresses -- much of it centering on Whitacre's relationship with FBI Special Agent Brian Shepard (Scott Bakula) -- the movie becomes funnier without straining to find laughs.


Some of this is due to a narration that reveals Whitacre's thoughts. I usually hate narration in movies, but the script by Scott Z. Burns -- based on a book by Kurt Eichenwald) -- uses Whitacre's thoughts as a comic counterpoint for what we're watching. For his part, Whitacre has no idea that anything he's saying might be construed as amusing or odd -- which, of course, serves to make the incessant workings of his mind even funnier.

Marvin Hamlisch's cartoonish score also emphasizes Soderbergh's comic intentions: The director sees absurdity across the corporate spectrum -- from ADM execs who toe the company line to Whitacre, who agrees to wear a wire as a means to trapping his felonious colleagues.


All of the intrigue centers on a case that led to variety of convictions in what became the largest price fixing scheme in U.S. legal history. Given the density and complexity of such a plot, you can bet that you'll be surprised by some of the script's revelations, particularly if you're not already familiar with Whitacre's story.


Soderbergh, who made a corporate thriller with the equally successful Erin Brockovich, this time avoids climbing on a moral high horse. The Informant! seems designed to show that there aren't many geniuses behind corporate crime or its exposure, and the movie feels firmly rooted in the ordinary world. The ADM office settings have a standard-issue quality, and Whitacre's wardrobe has a studied look that perfectly suits a biochemist who believes he has a strong feel for business, except of course when he doesn't.


It may take a few minutes to adjust to the movie's offbeat rhythms, but if you allow The Informant! to sneak up on you, it should prove one of the more enjoyable movies of the fall, a comic take on serious business that often has you gasping in disbelief, which -- in this case - is a good thing.

Posted by Robert Denerstein at 8:30 PM