A meditative helping of low-key sci-fi 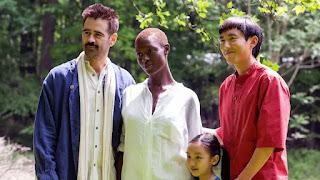 Korean-born director Kogonada has a keenly developed aesthetic sense. In After Yang, a futuristic story in which a family loses a companion -- an android known as a technosapien -- Kogonada sustains a meditative mood that gets into your head and under your skin.
The movie has a story of sorts. Android Yang (Justin H. Min) has been purchased as a companion for the adopted Chinese daughter (Malek Emma Tjandrawidjaja) of Jake (Colin Farrell) and Kyra (Jodie Turner-Smith).
When Yang breaks down, young Mika becomes distraught. Her parents purchased Yang to be a companion and to help school young Mika in Chinese culture.
What's a dad to do? Try to get Yang repaired, of course.
Turns out Yang was purchased as a refurbished model and the company that issued Yang's warranty has gone out of business. Jake tries an unauthorized repairman (Ritchie Coster), who says Yang might be equipped with spyware. He gives Jake Yang's memory chip (or something like it) and suggests that he review its contents before deciding whether to repair Yang or let the technosapien "decompose."
Jake then consults a professional (Sarita Choudhury) who helps him browse Yang's memory. He learns about Yang's connections beyond the family, notably with a young woman (Haley Lu Richardson) who once worked as a barista.
Kogonada's movie falls mostly on Farrell's shoulders. Jake sorts through Yang's memories, a task that forces him to ponder the relationship between memory and humanity.
Even as Jake's inner turmoil is suggested by a restrained Farrell, the movie operates under a transfixing calm. After Yang floats by easily, challenging assumptions about ethnicity and other matters. Complex issues rise like bubbles in a stream.
If you're waiting for a knock-out plot development, you may still be waiting after the end credits roll. Kogonada  (Columbus) looks at big issues through a narrow gauge, the design of the home occupied by this family, the driverless car with plants growing in it (we see only the car's interior), and the delicacy with which Farrell approaches brewing a cup of tea.
Kogonada leaves it to us to decide what to make of the way Jake and his wife connect as parents too busy to fully relate to their child and each other.  It's not only Mika who misses Yang; the family doesn't quite know how to function without him.
Making a movie of subtly shifting tones is a gamble that doesn't always pay off and Kogonada offers little by way of explanation of how humanity has arrived at this multi-cultural, multi-racial point.
Still, I found it impossible to watch After Yang without getting caught in its quiet flow.
Posted by Robert Denerstein at 11:10 AM