He played some of the world's worst golf 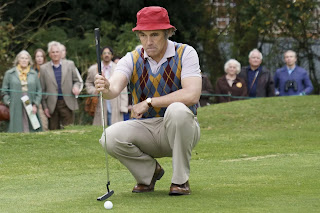 If you look at the picture on the right, you might suspect that you're about to read about a movie set in the world of golf. You'd be half right. There's golf in The Phantom of the Open, a British movie comedy starring Mark Rylance, but most of the golf is bad enough to be laughable. Early on, we learn that Rylance's Maurice Flitcroft qualifies as a caring guy: He married his wife Jean (Sally Hawkins) even though she was pregnant with another man's child. That child (Jake Davies) grows up to become become Maurice's boss at a shipyard in the port town of Barrow-in-Furness.  Maurice and Jean have children together, twins played by Christian and Jonah Lees. The twins dream of becoming famous disco dances. Why not?  It's the '70s. Maurice, who's 46, has his own dream. He wants to compete in the British Open, even though he knows nothing about golf and has never played the game. Based on a true story, Phantom of the Open follows the exploits of Maurice who in 1976 actually made his way into the British Open, where he chalked up a miserably high score of 121, the worst in the tournament's history. Rhys Ifans signs on as the official who wants to boot Flitcroft from the sport.  The golf establishment is dutifully alarmed but the bumbling and unflappable Maurice assembles a fan base. Don't look for a life-changing experience, but Rylance and the rest of the cast keep director Craig Roberts' Phantom of the Open close to par.