‘Bones and All’ difficult to digest 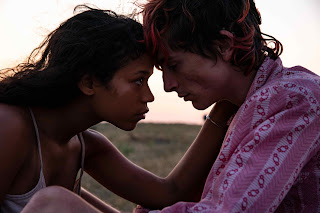 If you simply described the premise of Bones and All, a story about two cannibalistic teenagers trying to find their place in society, it might sound like an ordinary horror film with lots of coagulated blood and amped up tension.
In the hands of director Luca Guadagnino (Call Me By Your Name) the movie turns into something different, an indie-spirited accumulation of strange scenes that suggests deeper meanings, “suggest” being the operative word.
But suggesting and saying aren’t the same thing, and for most of it two-hour and 10-minute running time, I kept waiting for Bones and All to find something. I'm no sure what. Not some on-the-nose declaration of purpose but perhaps a door that swings open, inviting us to drop beneath the surface.
Instead, Guadagnino suspends his movie in a low-rent limbo where nearly everything seems drab, unappealing and only potentially meaningful.
Those looking for color will find it mostly in the blood that stains the faces of the movie’s young cannibals after they chow down.
Without making too big a fuss about it, Guadagnino lets us know that the film, based on a YA novel by Camille DeAngelis,  is taking place during the ‘80s. Working phone booths. A TV repairman’s truck. (Yes, kids, people once had their TVs repaired). Music on the soundtrack. It's all from the '80s.
In the film’s best performance, Taylor Russell portrays Maren, an 18-year-old cannibal kid who’s abandoned by her father (Andre Holland), a caring man no longer able to cope with his daughter’s proclivities. Every time she bites, they must uproot.
Once dad is gone, Maren sets out on her own. Early in her journey, she encounters Sully, played by Mark Rylance with a vaguely southern accent, a long braid, and skin-crawling creepiness. Sully wants to teach Maren how to live as an “eater,” which is how those driven by irresistible flesh-eating urges refer to themselves. He also craves company.
After wisely splitting from Sully, Maren meets Lee (Call Me By Your Name star, Timothee Chalamet), another “eater.
Unable to find niches in the “normal” world, the two travel around the country in Lee’s pick-up truck. During one encounter, they meet a couple of good-ole boys, also eaters (an unrecognizable Michael Stuhlbarg and David Gordon Green).
Stuhlbarg’s character explains the title. Ominously, he tells Maren and Lee that they won’t be full-fledged eaters until they consume a body “bones and all.”
There’s before bones & all and after, he says, signaling what I took to mean full and gleeful submission to one’s cannibal self.
Unlike the movie’s two main characters, these two are barbaric eaters. Or maybe they just don’t like leftovers.
In another encounter, Maren meets her institutionalized mother (Chloe Sevigny), who presumably passed the macabre genetic heritage of “eating” to her daughter. Mom, by the way, had herself locked up so that she wouldn’t victimize anyone else.
The supporting cast fully embraces these whacky roles. Chalamet charts his own weird course.
The movie attempts to redeem itself by showing that Maren and Lee don’t really want to be “eaters,” although they take different approaches to their unexplained  “affliction.”
Maren adopts a moral stance: She’d rather not kill. Lee says he has no choice. It’s not clear, though, whether Maren can choose to be a more acceptable kind of carnivore.
Guadagnino doesn’t cop out on gore and those who are squeamish about such things should probably find another movie about two outsiders roaming a lonely, creepy world.
If you’re wondering whether Maren and Lee eat regular food, they do — at least until the need to feed on human flesh overcomes them. I guess the movie wants us to see them as a couple of kids desperately in need of connection.
The movie's saving grace, such as it is,  lies in Guadagnino’s understanding of the sadness of outcasts.
And, yes, it takes talent to draw us into this bizarre world and accept (or at least adjust to) its terms, so much so that we forget to step outside and consider what we’re watching.
Should we do that, we might see Maren and Lee as needy kids who also happen to be killers who can’t control themselves.
When these kids get hungry someone dies. Just sayin’.
Posted by Robert Denerstein at 11:10 AM