Oliver Stone gets his groove back

Savages takes a blistering look at the drug trade. 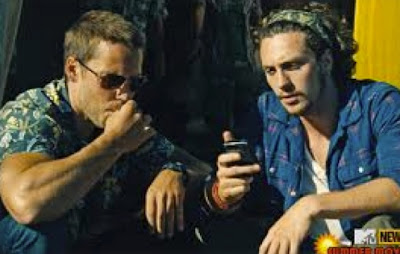 If you didn't already know that it's a bad idea to get crosswise with a Mexican drug lord, Oliver Stone's Savages will deliver the message in bold, gut-kicking fashion. Author Don Winslow's 2010 novel of the same name has provided Stone with a cornucopia of ingredients that he definitely knows how to cook.

Spilling over with sex, violence and ill-gotten luxury, Savages is Stone's best work in a long time, a movie that tells a vivid story that pretty much keeps Stone off his soapbox.

The action revolves around three characters. Chon (Taylor Kitsch) is a former Navy SEAL who runs a thriving marijuana business along with his parter Ben (Aaron Johnson), a brainy Berkeley grad with a social conscience. Ben uses some of his money to help folks in Third World countries.

Chon and Ben live with Ophelia (Blake Lively), a woman who goes by the name of "O" and who narrates this seductive story of crime and corruption. Both men sleep with "O," and both profess to love her. She insists she loves both of them. It takes two guys to make a whole man for "O" -- or so she says.

Stone wisely surrounds the movie's young leads with a veteran supporting cast that includes Salma Hayek (as a drug czarina); John Travolta (as a corrupt DEA agent); Benicio Del Toro (as a brutal mob enforcer) and Demian Bichir (as a well-dressed executive in Hayek's crime network).

The trouble starts when Hayek's Elena decides that she's going to take over Chon and Ben's business. She's attracted to this California duo because they've cultivated the best pot in the U.S., marijuana known for its killer THC count.

Ben, who's had enough of the drug business, is ready to sell. Chon wants to hold onto the enterprise they've built. Besides, he's convinced that no involvement with Mexican drug lords comes with insurance: It only can end badly.

If there's a certain amount of callowness among the movie's younger actors, the old pros compensate. Looking thick as a side of beef and sporting a close-cropped hair cut, Travolta is both funny and appalling as a rogue DEA agent; Del Toro's turn as the quietly vicious Lado follows suit; it's, by turns, chilling and amusing; and Hayek brings power-hungry bitchiness to new levels of steely-eyed intensity as Elena.

The rest of the plot involves kidnappings, torture and a level of brutality from which Stone never shrinks. Think of it this way: When drug lords decide to "punish" someone, they're not talking about spankings or slaps on the wrist. The squeamish should know that the movie includes beheadings and a scene in which a suspected rat is doused with gasoline and burned alive.

I don't know if there's a larger point here, although we can't help noticing that the drug trade couldn't thrive without massive police corruption and wanton violence.

Stone and cinematographer Dan Mindel balance the bloodshed with the rich light of Laguna Beach, where Chon, Ben and "O" reside. They also do a fine job of pointing out how luxury contrasts with squalor, depending on where characters fit on the drug-trade ladder.

Some of the dialogue is burdened by a phony, pulp toughness that rings hollow ("You don't charge the world, it changes you") and some of it is bitingly funny. I can't cite the movie's best darkly funny example without including a spoiler, so you'll have to take my word about the amusing part.

You'll find many of Stone's trademark visual tricks, but this time, he's letting the story do most of the work, and Savages is better off for it. Put another way: The movie is good enough to make you forget all about Wall Street: Money Never Sleeps. Even an overly tricky finale (bound to annoy some viewers) can't cancel the pleasures of this robust, sensual and unashamedly scabrous movie.

The real fun of Savages springs from the movie's pungency, from Stone's bravura handling of its violent set pieces and from his insistent acknowledgement that the dark side doesn't necessarily disappear just because the California sun is shining.