The men in charge of Israeli security

The Gatekeepers takes a powerful look inside the Israeli defense establishment. 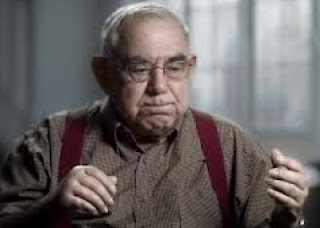 The ringing phone startles you out of a deep sleep. You look at the clock on the nightstand. Two a.m. You barely have time to mutter to yourself and shake off any lingering traces of grogginess when the voice on the other end of the line tells you that an extremely reliable suspect has been caught and that this suspect has knowledge about explosives that have been planted in a densely populated neighborhood.

The explosives are timed to go off at 5 a.m., which means you have less than three hours to learn where the bombs have been hidden.

The question: How far would you go to obtain information about the location of those bombs, information that could save hundreds of lives?

In a filmed interview conducted at last year's Toronto International Film Festival, director Dror Moreh described just such a scenario as he discussed the mindsets of the subjects of his Oscar-nominated documentary The Gatekeepers.

Moreh was trying, I think, to help us understand something about the world inhabited by six former members of the Shin Bet, men whose experiences provide the backbone of what turns out to be a revealing and vitally important documentary.

It's equally important to understand that although The Gatekeepers may be viewed as critical of many Israeli policies, the criticisms are not coming from naive, placard-carrying peaceniks from the Israeli left. They are coming from men who sat at the heart of the Israeli, anti-terror establishment and who have made decisions with life-and-death consequences -- for Israelis, as well as for those who have been targeted by the Shin Bet.

Moreh says he was inspired by Errol Morris's The Fog of War, a documentary in which former Defense Secretary Robert McNamara reflected on his controversial past, particularly with regard to the Vietnam War. The mere existence of both films qualifies as a small wonder. In Moreh's case, former heads of Shin Bet were persuaded to discuss their careers with surprising candor and to opine about the apparently endless conflict between the Israelis and the Palestinians as it has unfolded since the 1967 war in which Israel took control of the Gaza Strip, the Sinai Peninsula, the West Bank, East Jerusalem and the Golan Heights.

Not surprisingly, on-going tensions in the West Bank have created a lot of work for the Shin Bet.

Each of the men interviewed in the film's seven sections is different, but the collective impression is one of stark pragmatism mixed with sober reflection. Yaakov Peri -- who led the Shin Bet from 1988 until 1994 -- says that retirement tended to make him "a bit of leftist." To me, this suggests that a look back can alter anyone's perspective.

All of the men are fascinating and bright, but the most interesting of them might be Avraham Shalom, who resigned after a notorious 1984 bus hijacking. Shalom looks the part of someone's beloved uncle (see above photo), but his reputation hardly fits the image.

There's no getting around the fact that these men have been hardened by what they have viewed as the demanding necessities of their work. To do their jobs, they have had to make decisions involving collateral damage. They also have had to live with the gnawing realization, expressed by nearly all of them, that Palestinian rage is not only understandable, but perhaps even justifiable.

Tellingly, one of them talks about how considerations about the viability of a Palestinian state have all but vanished amid a consuming preoccupation with terrorism.

Moreh skillfully uses archival footage to bring events to life. The Gatekeepers is no dry exercise for policy wonks; it's a gripping foray into an often secret world.

It's sobering (and in a way encouraging) to hear the men charged with protecting Israel's security express reservations about whether the sum total of their efforts has created a better, safer Israel. Argue with their conclusions if you want, but it's difficult to dismiss these voices from the depths of Israel's "inner sanctum."

"Consider the source." Isn't that what skeptics always say when shying away from supposedly biased assessments? In this case, the bromide doesn't apply. Damn right, we need to consider the source. Who's in a better position to reach some of the film's alarming conclusions than these six men?