A kid on the losing side of war

The child of Nazi parents faces an uncertain and perhaps harrowing future. 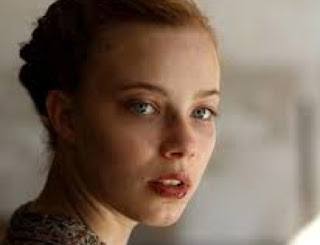 The artistic imagination is such that it frequently wants to push into dark corners. It's possible for a writer to wonder what it might be like to be accused of a terrible crime or how it might feel to inherit and then squander a fortune. Director Cate Shortland, working from the middle section of Rachel Seiffert's 2002 novel The Dark Room, has taken such an unsettling journey. In her new movie Lore, Shortland tries to show us what it might have been like to be the child of an SS officer in the days just prior to the end of World war II.

This unusual and instantly provocative perspective gives Lore its compelling strangeness, a strangeness that sometimes leaves us unsure what to think. Can any suffering these children endure compare to the massive death and trauma inflicted on so many?

Fourteen-year-old Lore (the gifted Saskia Rosendahl) is the oldest child in a family of five: a sister, two twin brothers and an infant boy. As the war winds down, Lore's father (Hans-Jochen Wagner) and her mother (Ursina Lardi) begin to flounder. Dad heads off on his own. Her nervous system ravaged by stress, Lardi's character decides to surrender to the allies. She then instructs her children to travel to their grandmother's home, a 500-mile journey to Hamburg that they will make mostly on foot.

Shortland, an Australian, plunges into a story that takes place against the chaotic, war-ravaged backdrop of Germany's defeat. Frightened German farmers who know what Lore's parents did during the war won't have much to do with the kids. Many of the adults the kids meet along the way are living in shock. One woman thinks the German people tragically let the Fuhrer down, a terrible failing because he loved them so much.

Unlike her siblings, Lore is old enough to have been intensely schooled in Nazi propaganda, including its rabid anti-semitism. Not surprisingly, she believed what she was told, but she's beginning to awaken to another reality, one stirred by photographs the advancing allies have posted, pictures of Nazi death camp victims. Some of the Germans react to these photos with disbelief, claiming that they have been staged. But Lore's wall of certainty begins to crack.

In what could have been an overly didactic contrivance, Lore meets Tomas (Kai Malina), a young man who's traveling across the country with Jewish identity papers. The irony, of course, is that such papers now ensure his safety rather than threaten it.

Tomas' arrival also sets the stage for Lore to begin exploring her awakening sexuality, which she (and the movie) don't really know how to handle. Her body is awakening at the same time as her mind.

Tomas becomes an important part of the youngsters' lives because he's good at procuring food and because he's evidently accustomed to defending himself against predators, violently if need be.

Lore functions on many levels. One one hand, it's a portrait of a teen-ager who's forced to take on responsibilities that are far from age appropriate. To complete her coming-of-age journey, Lore must not only fight physical hardship, but the encroaching knowledge of who her parents were. Viewed from another angle, Lore can be seen as a troubling look at the mentality of ordinary Germans in the immediate aftermath of a devastating defeat.

As is the case with many intriguing movies, we're left to wonder just how far Lore has come when her journey ends. Has she transcended the limits of an ideology that had become second nature to her? Whether she has or not, it's clear that she has led her siblings across difficult terrain -- both geographically and psychologically.

Whatever else happens in Lore's life, it seems certain that she'll never fully reconcile with her parents past, which -- of course is also her country's past. Denial won't work for Lore, just as it won't work for her shattered, defeated country.

Posted by Robert Denerstein at 10:32 AM