A major helping of Greta Gerwig 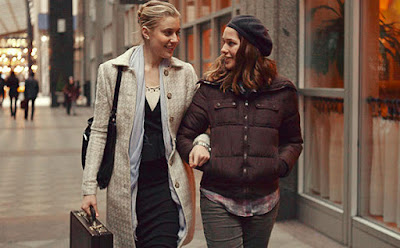 In Mistress America, Greta Gerwig draws on all her power to play a scattered, funny and wildly ambitious New Yorker. As a young woman seeking a place for herself in a trend-crazed world, Gerwig's Brooke creates a tornadic whirl around everything she does.

Spend five minutes with Brooke, and she'll ramble on about possible TV shows she wants to produce (a reality show called Mistress America being one of them), new apps she plans to invent and scads of other imagined endeavors that she hopes will secure her niche in a fluid economy.

Here's the thing, though: We get Brooke early, and there's not much left for us to learn about her in this Noah Baumbach-directed comedy. Baumbach, you'll recall, previously worked with Gerwig on Frances Ha.

Although she's the movie's dominant force, Gerwig's Brooke is not its main character. That job falls to Lola Kirke's Tracy, a college freshman who aspires to be a writer. Because Tracy's mother (Kathryn Erbe) is engaged to Brooke's father, she encourages Tracy to call her soon-to-be step sister.

Driven by an inability to connect with her peers, Tracy contacts Brooke. Instantly, she's drawn into the vortex her future step-sister creates: parties punctuated by a blur of activities and a frenzied stream of ideas.

Joining Brooke on her trip to Dylan's upscale Connecticut home are one of Tracy's student friends (a droopy Matthew Shear) and his improbably jealous girlfriend (Jasmine Cephas Jones).

All of these characters and a stray from Mamie-Claire's book group gather for a scene in which Baumbach makes a major misstep: He tries his hand at farce.

Good for a few chuckles and savvy about the way certain people are able quickly to create a seductive sense of intimacy, Mistress America winds up feeling like awfully thin gruel, a comedy that struck me as more interested in letting us know it's smart than in making us laugh.