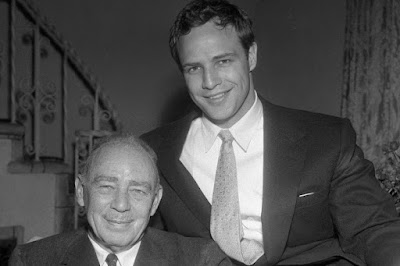 Watching Listen to Me Marlon is like hearing Marlon Brando deliver his own eulogy. That's because this revealing, strange and sometimes poetic documentary is built around a series of audio-tapes Brando recorded in his California home.

That's not to say that director Stevan Riley's movie is an exercise in Brandoesque self-congratulation. Brando can be self-critical, insecure and emotionally vulnerable, and there are times when we wonder whether he's the most reliable of narrators.

Still, listening to Brando seldom is anything less than fascinating. He tells us he fretted over whether he could play Don Corleone in The Godfather; he says Francis Ford Coppola made him the scapegoat for delays in the filming of Apocalypse Now. He tells us how he felt about Bernardo Bertolucci, who took him a little too close to the edge in Last Tango in Paris. He speaks of finding a tropical paradise in Tahiti, after a miserable experience making Mutiny on the Bounty.

Early on, Brando sings the praises of Stella Adler, the acting teacher who taught him the vaunted Method at her studio soon after he moved to New York.

We get the feeling, though, that the Method isn't all that made Brando into his generation's best actor: Adler quickly realized that Brando's gift was a special one. Her belief in Brando helped him believe in himself.

And, yes, there are personal revelations: Brando talks about his alcoholic, mentally disturbed mother and a father so abusive that Brando wouldn't let him near his own children.

Brando's children were a source of joy and tragedy for him. In 1990, Brando's son Christian stood trial for shooting his step-daughter's boyfriend. Christian spent five years in prison.

After Christian's arrest, a shaken Brando can be seen proclaiming that misery had found its way to his house.

Riley bolsters the tapes with early interview footage of Brando, clips from movies, and snippets of home movies. The net result is an amazing foray into Brando's inner world -- from early high points when he was enjoying being the toast of Broadway to late-career disillusionment when he decided that the only thing that mattered in Hollywood was money.

How you react to Listen to Me Marlon depends in large measure on how large (no pun intended) Brando looms in your movie consciousness. (At one point, you'll hear Brando trying to talk himself into weight loss.)

Throughout the movie, Riley offers bits of a self-hypnosis exercise Brando taped. He was so great an actor that he could make himself his own audience.

I was more moved by Listen to Me Marlon than any other movie I've seen this year, perhaps because I've never been more affected by a performance than the one Brando gave in On the Waterfront. I saw it as a kid, and have seen it many times since then. It never fails to astonish me.

I don't know if Brando intended for anyone ever to hear these tapes, and I wondered if the movie weren't somehow a post-mortem invasion of his privacy.

In the end, though, I decided to receive this impressive documentary with gratitude. I was more than happy that someone gave Brando have the last word. A genius deserves nothing less.

Posted by Robert Denerstein at 9:10 AM