These warriors are immortal ... well ... almost 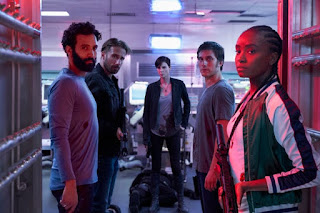 The Old Guard tempers generic superhero ploys with an undercurrent of sadness — not the sadness caused by witnessing casualties in the battle of good against evil, but the sorrow of warriors who are killed in battle and then are reborn as immortals. After a few centuries, not being able to die can become a drag.
But unlike Tithonus, about whom Lord Alfred  Tennyson, wrote a great poem, these immortals don't age. Tennyson's Tithonus suffered from an oversight: He was granted immortality but forgot to include eternal youth.
Victorian poetry aside, the immortals of Old Guard are curious creations: Although they can’t die, they do feel pain when they’re shot or stabbed. It takes a few moments for them to revive as their wounds, no matter how grave, miraculously heal.
And about that immortality: It comes with a proviso. Eventually, the ability to survive any attack wears off. So these “immortals” eventually will die -- not so much at the hands of a foe, but at the bidding of the relentless fate that chose them in the first place.
Members of The Old Guard tend to be lonely, having long ago lost their closest loved ones and having endured hundreds of years of human history.
Led by Charlize Theron — as Andromache of Scythia or Andy, if you prefer — we meet this group of stalwarts when a CIA agent (Chiwetel Ejiofor) hires The Old Guard to carry out a dangerous mission in Somalia.
A group of male companions from different historical eras assists Andy; these include two men (Marwan Kenzari and Luca Marinelli) who once killed each other in battle but who since have become deep friends and lovers. A fourth man (Matthias Schoenaerts) is a bit of a loner.
The group’s dynamics are shaken up when a new member appears. A Marine brought to death's door in Afghanistan, Nile (Kiki Layne) plays an Old Guard newbie, a woman who must adjust to life as an immortal, as well as to the demands of her new colleagues.
A bit cynical after centuries of being disappointed by humans, Theron’s Andy — also the oldest of the immortals — is clearly in charge.
Director Gina-Prince Bythewood  (Love & Basketball) includes enough globe-hopping action to add summer blockbuster aura to the proceedings. (Old Guard  bows on Netflix on July 10).
The movie falters when it comes to a screenplay that includes a profit-driven character who runs a big pharmaceutical company. Harry Melling plays Merrick, an egomaniac who wants to capture the entire Guard, extract DNA samples from them, and make a fortune with the miracle drug he's sure he can develop.
A sense of fatigue marks the long-lived Andy, appropriate for the character, but a bit enervating, and some of the dialogue could have withstood rewriting.
Having said all that, The Old Guard is the closest you can get these days to typical summer-movie fare -- and not feel bad about it.
By the way, if you like Old Guard, the movie’s ending paves the way for a sequel that, I imagine, might surpass the original by finding something better for its surprisingly soulful characters to do than escape the clutches of a greedy corporate menace.