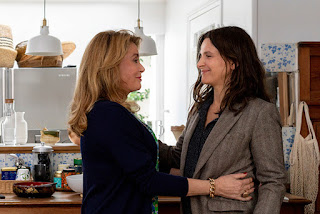 Director Hirokazu Koreeda leaves Japan to direct The Truth, a movie about the relationship between an aging actress (Catherine Deneuve) and her grown daughter (Juliette Binoche).  Setting his story in Paris, Koreeda focuses on characters struggling to live with years of lies and resentments — all while simply trying to survive a family visit.

The story centers on Deneuve’s Fabienne Dangeville, a celebrated French actress who’s no longer landing the great roles. It seems as if Fabienne was written for Deneuve who takes over the part with easy command and flashes of callous wit. Accustomed to getting her way, Fabienne refuses to be anything less than the center of attention, even when she’s playing a supporting role in a movie featuring an up-and-coming new actress (Manon Clavel).

Koreeda embeds the story's familial tensions in a typical scenario. Binoche’s Lumir, her American husband Hank (Ethan Hawke), and their young daughter (Clementine Grenier) arrive from the US to help celebrate the publication of Fabienne’s memoir.

By trade, daughter and son-in-law instantly find themselves in competition with Fabienne. Lumir writes screenplays: Hank acts — although his career seems to be going nowhere and his battles with the bottle have made trips to rehab a regular feature on his calendar.

Lumir regards her mother’s autobiography as a self-aggrandizing work of fiction. Lumir finds Fabienne's attempts to portray herself as a devoted mother laughable. Fabienne never cared as much about her daughter as she did about her career.

Fabienne clearly expresses the priorities that govern her life; i.e., the truths that never made it into her book, which ironically she has entitled The Truth. Fabienne would rather be regarded as a good actress than a good mother, for example. She doesn’t allow for the possibility that one might be both.

The atmosphere isn't venomous, but no one escapes Fabienne's tendency to regard others as instruments of her will. Fabienne's long-time agent and adviser (Alain Libolt) must suffer the shame of never being mentioned in his client's book, for example.

To add a mirror-like twist, Koreeda takes us to the set of the new sci-fi movie on which Fabienne has begun work. She's playing the daughter of a mother who travels into space to avoid dying from a terminal disease. Fabienne portrays the daughter when she’s old, near death, and still dealing with a youthful mother who’s only able to visit Earth periodically. The neglectful mother is playing the neglected daughter.

A running theme of accusation also emerges. Fabienne once out-maneuvered a close friend — now deceased — out of a part that brought Fabienne a coveted Cesar Award. Lumir presses her mother to feel something akin to guilt. Fabienne will have none of it. For her, the world and its occupants exist primarily as source material for her work.

Those familiar with Koreeda’s movies (Shoplifters, After Life) know that he favors an unhurried style that allows an audience to get to know his characters. I wouldn’t say that The Truth represents Koreeda’s best work, but Koreeda knows how to put teeth into a drama that seldom erupts, bleeds, or screams. He may not go for the kill, but that doesn't mean he doesn't know where the wounds are.