The fine art of pastries 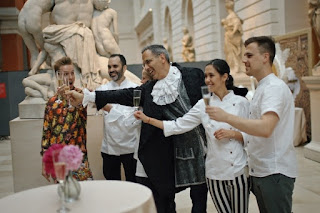 The image of Versailles as a monument to ornamentation and excess long has been established in the western mind. The great palace with its manicured garden and gilded ... well ... almost everything ... has so often been taken as a symbol of royal indulgence that you probably couldn't be blamed for taking it as the animating cause of the French Revolution.
Having said that, it's my pleasure to report that Ottolenghi and the Cakes of Versailles has less to do with history than with a memorably playful event.
In 2018, New York's Metropolitan Museum of Art staged an exhibit called Visitors to Versailles, a show that drew on the Met's vast collection and from the Chateau de Versailles. The Met tried to give viewers a taste of life at Versailles from 1682 until 1789 when Louis XIV -- a.k.a., the Sun King -- worked his magic on the place.
As part of the festivities for 2018, the Met asked renowned chef Yotam Ottolenghi to assemble an event in which a variety of pastry chefs would create temptations based on their interpretations of Versailles.
To fulfill his charge, Ottolenghi invited five pastry chefs to indulge their royal instincts. The five were: Dinara Kasko from Ukraine, a chef whose architectural creations, inspire gasps; Ghaya Oliveira, who plies her trade at New York's Manhattan's Daniel and specializes in chocolates; Janice Wong, who hails from Singapore; Bompas & Parr, a duo from England that employs English jellies as their medium.
The seriousness of the chefs belies what might seem an entirely frivolous event, nearly as decadent as anything that transpired during Louis XIV's sugar-coated watch.
Additional attempts at seriousness fall on the shoulders of Deborah Krohn, a Bard College historian who paints a picture of Versailles that has more to do with fact than fancy.
As it turns out, the French hoi polloi were allowed to wander the grounds, a gesture of openness with unintended consequences: The French learned that the very rich were not like the average Pierre or Paulette.
As amusing as it can be, Cakes doesn't always rise to perfection. I would have liked to know more about the guests who consumed those cakes at the Met and it struck me that some of the inventions we see when Ottolenghi introduces us to these masterful chefs are more stunning than what they created for the Met.
Moreover, attempts to introduce the subject of wealth equality in our own time seems intended to keep the movie from becoming an endorsement of opulence.
Still, only a spoilsport would discourage someone  from slicing into director Laura Gabbert's  cinematic cake. The Israeli-born Ottolenghi makes a genial and informative host, sprinkling the documentary with biographical information about himself, and we all can indulge a moment of happy fantasy: The one time when dessert truly qualifies as the main course.
Posted by Robert Denerstein at 1:10 PM