Great action in a muddled ‘Tenet’ 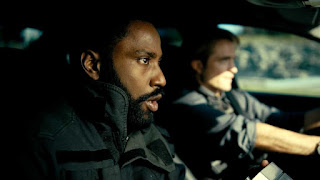 Tenet involves an ingenious conceit: the idea that time can be manipulated to flow forward and backward simultaneously. This means that a car chase could be proceeding at breakneck speeds while the same cars move in opposite directions — or something like that.

Graspable more in outline than in detail, Tenet creates an often frustrating mixture of consternation and thrills.
Director Christopher Nolan brings Inception-like complexity to a story that probably will have fans filling chat rooms and Zoom calls with speculation, insights, and connections to whatever they perceive as the movie’s meaning.
Then there’s me.
First off, I saw Tenet at a screening in which a handful of critics were spatially distanced in a large IMAX theater.
I’m not sure what awaits moviegoers when they venture into newly re-opened theaters but I admit to feeling a bit of guilt at having seen Tenet under what surely must be the safest possible conditions. I hope you’ll be able to do the same.
The movie tosses four principal characters into a mind-bending Cuisinart built around the concept of inversion, a state in which effect can precede cause.
John David Washington (BlacKkKlansman) plays a character described in the credits only as The Protagonist, a secret agent who must save the world from dreams of annihilation by Andrei (Kenneth Branagh), a crazed Russian oligarch.
Andrei's art appraiser wife Kat (Elizabeth Debicki) develops a flirtatious relationship with The Protagonist, but her main concern involves rescuing her young son from the clutches of his evil and monumentally abusive father.
As his mission unfolds, Washington’s character acquires a sidekick, the devilishly stylish Neil (Robert Pattinson).
Not much else needs to be known about the cast. Michael Caine makes a brief appearance as a British spy and Indian actress Dimple Kapadia plays a sophisticated woman who traffics in arms.
For all its theories, talk of algorithms and such, Tenet plays like almost every other summer movie, by which I mean it alternates exposition (a lot of it) with imaginatively conceived action set pieces.
I half wondered whether Tenet might be a movie that’s best enjoyed by throwing out the bathwater (the story) and keeping the baby (the action).
A chase involving speeding trucks is particularly exciting and Nolan excels at making the movie's theoretical conceits visible: bullets fly backward into guns and demolished buildings reassemble, for example.
Did I mention that birds can be seen flying backward?
Because the characters need to wear oxygen masks when they are "inverting," some of the burdens of performance have been lifted. But these days, not seeing everyone's face all the time seems depressingly familiar.
Of the performances, Debicki stands out. Her Kat is sexy, calculating, and possessed of worldly intelligence.  Pattinson brings casual charm to his portrayal and Washington gives a forceful, straight-ahead performance that provides the movie with its continuity.
Speaking with a Russian accent, Branagh alternates understatement and outbursts, giving the movie a full quota of human menace.
I presume that Nolan and company collected major frequent flyer miles as they location-hopped to places as far-flung as Italy's Amalfi Coast, Mumbai, Estonia, Denmark, Norway, and London.
All this is accompanied by a score (credit Swiss composer Ludwig Goransson) that pulses and pulses -- and then pulses some more.
After a well-staged opening which seems to have been inspired by a real-life 2002 terrorist attack on a Moscow theater, the movie quickly leaps from what many will see as Bondian terrain to one involving alternate realities.
With Nolan, the reality in which we all reside never seems complex and baffling enough. His worst enemy: the chronological order that marks the way most of us experience the passing of time.
I leave it to you to determine whether it's important to catch every line of dialogue. I know I missed a lot.
And that seems to sum up the Tenet conundrum; you’re often left wondering whether you’ve lost your place or whether the story simply has gone on without you. The result, at least for me: Increasing indifference.
It’s obviously up to you to decide whether you want to see Tenet, which only can be viewed in theaters. Exhibitors, studios, and other representatives of what might be described as the motion-picture industrial complex certainly hope you do.
I  have mixed feelings about the reopening of theaters and I’m eager to hear from those who go. I’m less interested in what you think of Tenet than in whether you felt safe in a theater where masks could be lowered to consume snacks.
In the end, how safely theaters can operate during a pandemic (it may take time to tell) strikes me as a far more important question than any I could raise about Nolan's latest spectacle.