When van living becomes a way of life 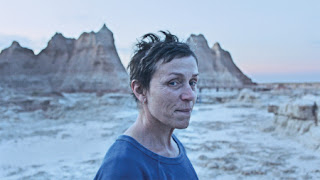 In Nomadland, director Chloe Zhao mixes real wanderers  and actors in ways that illuminate the lives of people who’ve permanently hit the road. The stock market may be breaking records, but a variety of people have checked out of the economy, some because they have no options and some by choice.
Frances McDormand plays Fern, a Nevada widow who lived in a town that vanished when its only employer -- the gypsum mine -- closed.  Fern's van has become her home. She sometimes finds temporary employment at an Amazon facility or in a restaurant.
"I'm not homeless. I'm just houseless," she says.
During her travels, Fern meets people who also are committed to the wandering way of life. Some move in caravans; others are loners. Some live off the grid.
Bob Wells, a real nomad, explains the ethos by which these travelers live, never going much beyond minimal necessities.
Fern also meets Dave (actor David Strathairn). Although he’s on the move, Dave looks to Fern for company, at one point inviting her to stay with him at his daughter's home.
But Shao is too committed to realism to create characters who will be redeemed by anything resembling romance. Zhao, who previously directed The Rider, is one of those rare filmmakers who places her films at ground level, close to the way real people live and survive.
Basing Nomadland on a nonfiction work by Jessica Bruder, Zhao takes her camera to Nebraska, South Dakota, Nevada, and California. She doesn't shy from showing the difficulties of van living: looking for bathrooms, dealing with cold, finding a place to shower, and locating hassle-free places where a van can be parked.
McDormand creates a character of ferocious independence. Fern never asks for sympathy. At one point, Zhao photographs Fern floating naked in a river, a woman who may be alone but who also can be at home in nature.
At times, Nomadland feels like a documentary, particularly when actors are interacting with non-actors. Fern, like us, hears the stories these folks tell.  A woman with cancer talks about her life.
Whispers of plot emerge: At one point, for example, Fern visits her sister (Melissa Smith) in search of a loan to finance an expensive van repair. Generally, though, she wants nothing from anyone.
Together, Zhao and McDormand introduce us to a woman who has lost everything (home, family, employment) but refuses to bend. Tragedy doesn't defeat Fern: It offers her glimpses of freedom.
That's not to say that Zhao romanticizes Fern's traveling life. She presents it without flourish or hype. Like Fern, the film demands to be taken as it is.*
I had published a review of Nomadland on Dec. 4, after festival viewing. I republish the review here because the movie goes into wide release Feb. 19.
Posted by Robert Denerstein at 9:35 AM