A couple deals with the aftermath of rape 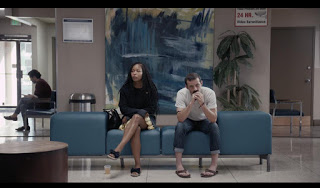 Test Pattern sets its story Austin, TX, a city that apparently offers its young residents plenty of social and racial fluidity. Additionally, Test Pattern assumes the existence of an environment in which men and women casually navigate a hook-up culture.
Lines seem non-existent or maybe unacknowledged. Initially, the movie seems to be about a young black woman who works as a development director for a local animal shelter and who dates a white tattoo artist.
But Test Pattern has more in mind than interracial dating. The movie's story revolves around the use of a date-rape drug and sexual assault.
Renesha (Brittany S. Hall) and Evan (Will Brill) meet in a bar. Despite an awkward first encounter, they become a couple.
Director Shatara Michelle Ford shows us a mostly happy match, but stasis seldom makes for good drama. So we wait for Ford, who also wrote the screenplay, to upset the apple cart.
On a girls' night out,  Renesha and a friend (Gail Bean) head for a bar. Because Evan stayed home, the women look available to two white guys out for a night of partying.
One of them (Drew Fuller) slips drugs into Renesha's drink, takes her to his apartment and rapes her.
When Renesha awakens, he drives her home, drops her off, and goes on with his life. No big deal -- at least not for him.
When Evan learns what happened, the movie becomes a story about the uneasy aftermath of Renesha's rape. Evan pushes Renesha to file charges, which requires finding medical personnel who will administer a rape test.
Evan and Renesha confront obstacles, bureaucratic and otherwise as they drive around Austin looking trying to start legal proceedings. Exhausted and discouraged, Renesha wants to move on. Evan, however, persists, and -- in part -- the film becomes a chronicle of how difficult life can become when rape moves into the legal sphere.
The movie also begins shining a light on Renesha and Evan's relationship. Will they talk about what happened? If they do, how will they approach the subject? Is Evan's insistence on holding someone accountable a dodge for his inability to explore the emotional dynamics of what happened? Does race fit into the equation?
Renesha and Evan don't do the one thing that might be most important: Deal with the feelings generated by the attack.
From the outset, it's clear that Ford is trying to make a movie in which me-too issues collide with the interpersonal dynamics of a relationship. As Renesha and Evan embark on their quest to find someone to administer a rape kit, we see flashbacks to earlier moments in the relationship. We wonder how  these scenes relate to later developments.
Hall gives the movie's stand-out performance as a young woman whose buoyant optimism and good will is undermined by an awful experience and by Evan's dogged response to it.
For all that Ford sets in motion and despite the subtle ways  she allows the characters to evolve, Test Pattern never seems a fully realized exploration of a difficult subject.
An abrupt and ambiguous ending throws the movie's questions back on the audience in ways that can be both provocative and unsatisfying and there isn't always enough going on to justify the movie's slowness.
Ford deserves credit for stepping into turbulent emotional waters even if she can't quite find a path to navigate her way out of them.
Posted by Robert Denerstein at 3:35 PM