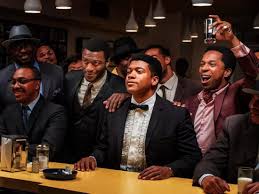 A wave of sadness swept over me when I finished watching One Night in Miami. The movie isn’t particularly sad. In fact, it's lively, provocative, and engaging.
But I also realized that all but one of the movie's principal, real-life characters — football and movie star Jim Brown — are dead.   Brown is now 84. Had Muhammad Ali, another of the movie's characters lived, he’d be on the verge of turning 74.
So I guess the sadness has to do with the passing of a cultural guard, all of whose members were prominent figures during the tumultuous 1960s, a time when I was still young.
Set in 1964, the movie introduces us to an Ali who was about to claim his boxing title and to announce his decision to join the Nation of Islam. Most Americans then knew him as Cassius Clay, a mouthy kid from Louisville.
The other main characters in director Regina King’s movie are singer/songwriter Sam Cooke and activist Malcolm X.

In the hands of King and screenwriter Kemp Powers, who adapted his 2013 play, the movie stands as an informed construction of what might have been discussed as the men gathered on the night Clay defeated Sonny Liston, an outcome that shocked nearly everyone in the boxing world except Clay.

All the characters are going through major life changes. Tired of football, Brown ponders retiring from the NFL.  Clay’s victory came on the eve of his ascendance to global stardom.

Cooke, perhaps the most satisfied of the group, was plotting further commercial success, and a troubled Malcolm X was about to break with the Nation of Islam.

A gifted actress, King moves behind the camera easily. She provides a fluid cinematic prologue and finds ways to escape the confines of Malcolm X’s suite in the Hampton House, a Miami hotel with a mostly black clientele.

As the men solidify and test their friendships, the movie  becomes a complex mixture of brotherly love, mutual admiration, chiding banter, and sharply stated positions.

As Clay, Eli Goree often plays the surprising role of peacemaker. Kingsley Ben-Adir creates a smart, ideologically devoted Malcolm who's more rigid than any of his companions, even as he fears for the safety of his family. As Jim Brown, Aldis Hodge creates a character of strength and conviction.

None of the men treat the others as icons, even though each of them understands that none of them can be considered "ordinary." They're all too famous for that.

One Night revolves around debates about the best way forward for black men in 1964. Economics? Political action? Learning to turn a racist system to one’s advantage?

Leslie Odom Jr.’s Sam Cooke creates the sharpest conflict with Malcolm X.  At one point, Malcolm X chides Cooke for not having written a song as relevant as Bob Dylan’s Blowin’ in the Wind.

Malcolm plays the role of provocateur, spoilsport, and conscience. Neither Brown nor Cooke is ready to renounce wine, women and song -- and they're not shy about letting Malcolm know where they stand.

One Night becomes tribute to the characters depicted, to the actors who play them, and to the way it makes an event that took place almost 60 years ago feel intensely present.

One Night takes us to a moment when the men were all young, vital and relevant. Because their conversations haven't lost much currency, One Night never becomes an exercise in nostalgia. It's got plenty of bite and although it's about a now-fading moment, it hasn’t lost its relevance.