Derek DelGaudio's In & Of Itself 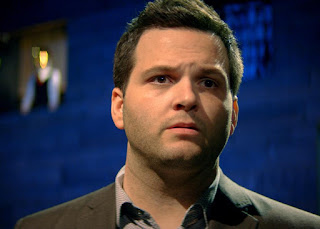 It would be unfair to call Derek DelGaudio a magician, although he does specialize in card tricks and illusions. It  would be equally unfair to call DelGaudio a storyteller, although that's part of his repertoire, as well. In the absence of a better description, it's probably best to label DelGaudio a performance artist.  Taken from several versions of DelGaudio's off-Broadway show from a couple of years back, In & Of Itself captivates with a heady mix of the abstract and the concrete. DelGaudio was filmed by director Frank Oz working in a small theater in which the audience frequently is asked to participate. DelGaudio appears before a wooden wall into which several box-like squares have been cut and which become part of the stories that DelGaudio tells. At its heart, In & Out (available on Hulu) is an exploration of identity: DelGaudio's, the members of his audience, and those who will see the film version. The movie begins with DelGaudio telling a story he claims to have heard in a bar in Spain. He sketches a tale about a man who played increasingly dangerous games of Russian roulette and acquired the name "Roulettista." Later, he talks about learning that his mother is gay. Whatever direction he charts, DelGuadio manages to create an edge that suggests that both he and the audience might be at risk. Of what? I'm not sure, but DelGaudio's deadpan delivery helps keep us off guard and allows Oz to sustain a consistent level of tension. Home movies and animation are employed to varying effect but keep In & Of Itself from feeling stagebound as DelGaudio builds toward the film's emotional (really) finale.
No Man's Land 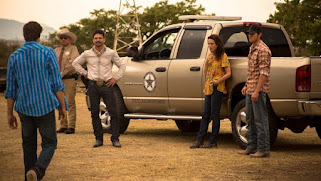 The Texas/Mexico border is dotted with areas that are south of official border crossings and north of the actual border. No Man's Land begins on a ranch located in this ambiguous territory. As evident as a cowboy hat at a stock show, the movie's purpose quickly emerges: to challenge a young Texan's idea about the immigrants who cross his family's property en route to the US. What could have been a topical gut-punch of a movie becomes an unconvincing journey about one man's redemption as he meets Mexicans who are willing to help him. The key incident in director Conor Allyn's contemporary western involves the shooting of a Mexican boy who's trying to cross the border with his father (Jorge A. Jimenez). Jake Allyn, the director's brother, plays Jackson, the son of a rancher (Frank Grillo) who's used to chasing Mexicans off the land where he lives with his wife (Andie MacDowell) and another son (Alex MacNicoll). After shooting the boy in a chaotic encounter, a guilt-ridden Jackson flees to Mexico on his trustee horse Sundance. Jimenez's character pursues him. So does a Texas Ranger (George Lopez in a deadpan but compassionate performance). Most of the movie deals with Jackson's encounters with Mexicans who feed him, shelter him and teach him that they're people, too. The movie invites us to consider questions about forgiveness and accountability (fair enough) but a persistent haze of idealization undermines credibility and creates a feeling that most of what we're seeing has been pre-programmed to deliver a message.
Posted by Robert Denerstein at 3:35 PM