A word on Cinema Diary. You may wonder why some movies receive full reviews and others show up in this abbreviated format. Lots of reasons. Some of the involve the number of movies being released in a given week. Eight this week, for example. Some of the reasons for the Diary relate to when I've seen a particular movie and how many more movies I need to watch prior to the weekend.
At the same time, honesty compels me to say that the directors and actors who made these films didn't make them to be regarded as secondary efforts. I don't. At the same time, I've yet to find a way to cope with weeks that are flooded with new movies. 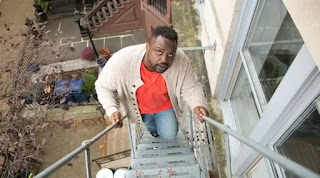 Movies don't get much more streamlined than Outside Story, a look at a man (Brian Tyree Henry) who locks himself out of his Brooklyn apartment, interacts with his neighbors, and wonders whether he should have broken up with his girlfriend (Sonequa Marin Green). Henry's Charles seems to be a nice guy, a film editor who specializes in assembling visual obituaries of celebrities. The key to the movie involves Henry's performance as a stressed-out but nice New Yorker who has encounters with a cop (Sunita Mani), a neighborhood kid (Olivia Edward), and an older woman (Lynda Gravatt) whose husband recently died. Director Casimir Nozkowski, who also wrote the screenplay, has a nice feeling for the idiosyncrasies of neighborhood relationships but he can't prevent the material from feeling a bit thin. Henry, currently on view in Godzilla vs. Kong, holds the movie together. Although the movie contains some conflict, the stakes feel pretty low -- which can be viewed as a blessing or a severe limitation or perhaps a bit of both. 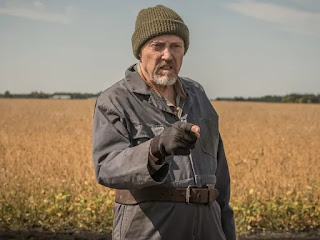 After seeing Christopher Walken miscast as an Irish farmer in Wild Mountain Thyme, I was dubious about Percy Vs Goliath, the story of a Canadian farmer who takes on the Monsanto in a prolonged court battle over patent rights involving canola seeds. But damn if Walken doesn't pull it off, doing credible work as Percy Schmeiser, a farmer who inadvertently planted Monsanto GMO seeds that had blown onto his property from a neighbor's farm. The result:  a prolonged suit. Roberta Maxwell portrays Schmeiser's wife Louise. Zach Braff signs on as the small-town lawyer who represents Schmeiser, and Christina Ricci appears as an environmental activist who encourages Schmeiser to challenge Monsanto. She also helps him take is story global with a visit to India. The story of a little man fighting a major corporation isn't exactly fresh but director Clark Johnson does a good job presenting complicated issues as Schmeiser's case makes its way to the Canadian Supreme Court.
Four Good Days 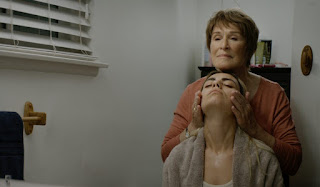 Familiarity may not always breed contempt, but it can breed fatigue when it comes to movies. Glenn Close and Mila Kunis play mother and daughter in an addiction drama about a young woman (Kunis) nearly ruined by drugs. Kunis' Molly wants to make another stab at kicking her habit so she asks her mother, Close's Deb, to take her in. This time she really means it -- or so she says. Director Rodrigo Garcia doesn't skimp on realism: Kunis has been given rotting teeth and a distressingly scrawny look. Deb blames Molly's addiction on the doctors who prescribed an Oxycontin regimen after a skiing injury. Since then, Deb has left her husband (Joshua Leonard) and her two kids. The title stems from the offer Molly receives from a detox doctor: If she can stay clean for four days, he'll give her a shot that will keep her from getting high on heroin. If she takes the shot before her system has been cleansed, she could die from its effects. Close and Kunis deliver strong performances but the movie can't escape the dogged quality of the storytelling.  It's difficult not to feel a bit guilty about wanting a fresh charge from an addiction movie, particularly one based on a true story. Still, we feel a bit like Deb feels when Molly shows up at her door after 14 failed attempts at rehab. What? You want us to go down this movie road again?