The Beatles up close and personal 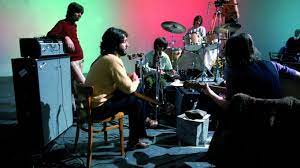 I know rock aficionados who approach the Beatles with the kind of parsing skills one expects from Talmudic scholars. These are folks who steep themselves in analysis of the music, the books, and the lore — all things Beatles.
And why not? The Beatles were a pop-cultural phenomenon like no other and their music grew and developed in complexity as they became more accomplished and famous.
I leave that kind of analysis to rock critics and I look forward to reading what some of them have to say about Peter Jackson's documentary, The Beatles: Get Back.
For me,  Jackson has made the perfect movie for anyone who has ever wondered how it would feel to hang out with The Beatles during a recording session. Watch the film and you'll know.
The nearly eight-hour documentary has been assembled  from 60 hours of footage shot in January of 1969 by director Michael Lindsay-Hogg for the documentary Let It Be, which was 81 minutes long and evidently hasn't been available since 1980.
Beatles mavens feel free to chime in with more details.
Jackson's version hints at the dissolution to come, notably George Harrison's discontent with how Paul and John, to a lesser extent, dominate the group's musical decisions.
At one point, George says he's leaving the band.
When, someone asks.
Now, says George as he walks out. (He does return.)
Yoko Ono almost always can be seen sitting at John's side, even while the group is working. She's either ignored by the others or, at times, becomes the subject of conversation, none of it memorably vicious.
Mostly, Jackson reveals the stop-start quality the creation process for songs originally meant to be part of a TV concert. They eventually were used in a rooftop concert staged at Apple’s London building, The Beatles' last public performance.
During their sessions, The Beatles seem most alive when they're playing classic rock tunes -- Blue Suede Shoes, for example. They can sound like the most fantastic bar band imaginable, musicians who share the same fondness for rock and revel in the fun of playing it.
At times, the movie is ... well ... boring, even a bit infuriating. You want the band to get on with it, to find the focus for their work which Paul acknowledges is missing.
I'm guessing Jackson knew that he might tax some viewers' patience but he’s taking pains to clarify the difference between creation and performance -- one arduous, repetitive, and frustrating; the other, exhilarating.
Beatles enthusiasts will find much to chew over in Jackson's lengthy, fascinating three-part documentary — and I might even return for a second look.
Several times I thought I’d give up on it. I couldn’t. It was, after all, The Beatles.
The film is available for viewing on Disney+.
Posted by Robert Denerstein at 1:10 PM

Email ThisBlogThis!Share to TwitterShare to FacebookShare to Pinterest
Labels: John Lennon, Paul McCartney, Peter Jackson, The Beatles: Get Back