The man with a plan for his daughters 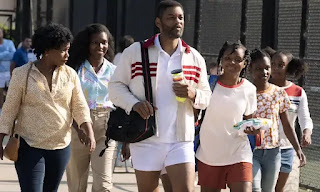 Any movie about the rise of sports icons faces a multitude of problems — not the least of which is the temptation to yield to the demands of formula. You know the drill. Hardship and toil inevitably are followed by a hard-earned victory, preferably for an underdog.
Thumbs are raised. Cheers abound. And then we all return to lives in which victories can be scarce.
King Richard, the story of Richard Williams, father of Venus and Serena Williams, can’t avoid every genre trap but the rise of the Williams’ sisters has plenty of appeal. We know from the outset that the sisters will hit it big, but we still root for them.
In some ways, the movie becomes a showcase for Will Smith, who plays a father who drives his daughters hard. Williams authored a 78-page plan for them and insisted that they fulfill it in the world of tennis.
Steeped in discipline and perseverance, Williams ignores obstacles and keeps pushing. His slightly stooped posture makes it seem as if he's leaning into his mission.
Venus and Serena are played by Saniyya Sidney and Demi Singleton, young actresses who give the movie its heart. Scenes of the Williams’ family of five daughters unfold with winning ease. The movie could have used more of them.
Richard Williams may be obsessed with his plan, but Sidney and Singleton show that Venus and Sabrina never stopped being kids — albeit extremely talented kids.
Of all the adult actors, Aunjanue Ellis hits one of the strongest notes. In  a powerhouse scene, Ellis's Oracene confronts her husband, pushing back against his ego.
When Venus' career begins to rise,  Mom takes over Sabrina's training. She's not going to allow Sabrina to be slighted.
Early on, the girls practice on a local Compton tennis court, a site that’s plagued by gang activity. Williams presses on until the girls can play on better courts as they navigate the predominantly white world of tennis.
Eventually, Venus finds a coach. Jon Bernthal’s Rick Macci has ideas about how to guide Venus’s career, which sparks conflict with  the obstinate Williams. It's sometimes difficult to distinguish between Williams' desire to protect his daughters and his desire to control their burgeoning careers.
Director Reinaldo Marcus Green moves the story toward Venus's professional debut. She was 14 in 1994 when she faced off against established pro, Arantxa Sanchez Vicario.
Venus and Serena are credited as producers, so it’s not surprising that the movie has an “authorized” air about it, and at 146 minutes, King Richard may have you checking your watch toward the end. An incident in which Richard, carrying a pistol from his job as a security guard, faces off against a neighborhood tough is shocking but under-explored.
I'm no expert on the life of Richard Williams, but I've read that some folks think the movie goes too easy on him. That may be true but the movie focuses on Richard as a father to Venus and Serena. It's not trying to be a fully developed biography of Williams.
Williams may have been King, but his daughters ended up as royalty. They not only conquered the tennis world, they transcended it.
Posted by Robert Denerstein at 1:10 PM