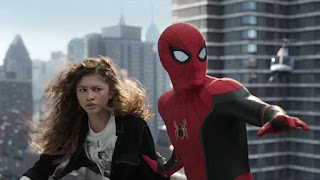 Everyone who cares about Spider-Man movies probably will have heard about some of the movie’s big “surprises” before they see it. Still, I’m not going to say much about major reveals except to note that they help get this third Tom-Holland edition on track.
I wouldn’t call Spider-Man: No Way Home great but it marks a significant improvement over recent editions and creates a bit of nostalgia with visits from previous villains, notably Doctor Octopus (Alfred Molina), Green Goblin (Willem Dafoe), and  Electro (Jamie Foxx).
For a while, it seems as if you need a scorecard to keep track of the legion of baddies who turn up, although Molina seems to receive more attention as part of a major sequence on a bridge.
Welcome back, Doc Ock.
As for other returnees: Marisa Tomei reprises her role as May Parker, Peter Parker’s aunt. Zendaya and Jacob Batalon return as Parker’s high school pals, one a girlfriend, the other an eager confidant.
Benedict Cumberbatch shows up as Dr. Strange, the character charged with setting the plot in motion.
Here's how it works: In the last installment, Spider-Man’s identity was exposed by Mysterio. Spidey must now find a way to restore Peter Parker’s anonymity.
To get the job done, Dr. Strange casts a spell. Like many purported cure-alls, Dr. Strange's magic has a weird side effect: It brings characters from the multi-verse into Parker’s life, hence the arrival of all those villains from other dimensions or, if you’re more pragmatic, other movies.
Director Jon Watts, who guided Holland's two previous journeys into SpiderWorld, does a serviceable job with the action, which is plentiful and noisy and at one point, evokes woozy memories of Inception.
If you’re looking for a comic-book story that’s upheld by unassailable logic, No Way Home may disappoint. Instead, the movie tries to ponder a big question: Is evil irredeemable? Better yet, the movie’s conclusion stirs as much emotion as the material allows.
Peter Parker isn’t the most assured of superheroes. How could he be? He and his teen pals —Zendaya’s MJ and Batalon’s Ned —are high school seniors who fret over not being admitted to MIT. Even their "safety schools" reject them because Peter Parker (now known to all as Spider-Man) has been getting clobbered by a TV loudmouth (J.K. Simmons). They're victims of guilt by association.
Heaven forbid, these kids might have to try a community college.
Oh well, say this: In going backward to acknowledge several generations of movies, Spider-Man takes a welcome step forward.
Perhaps that's what matters most when it comes to a franchise.
Posted by Robert Denerstein at 4:10 PM