A slow and overlong 'Nightmare Alley' 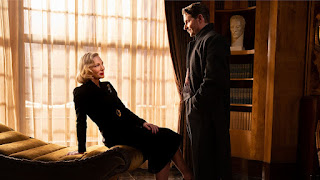 It’s no surprise that director Guillermo del Toro has remade Nightmare Alley,  a 1947 noir movie starring Tyrone Power in a role intended to challenge the actor's glamor-boy image.
The material, from a 1946 novel by William Lindsay Gresham,  seems well-suited for Guillermo (Pan's Labyrinth and The Shape of Water), a director who often draws in dark, bizarre strokes.
Beginning in the world of low-rent carnivals,  the 1947 movie delved into the world of fraud and exploitation, spreading its story across two environments, one seedy, the other more decorous. The leap suggested that greed and ambition knew no borders.
More than 70 years later, del Toro has taken the original 111-minute movie and turned it into a 140-minute trip into sideshow culture.
The difference in length can be taken as emblematic of the way that cult or noir creations have muscled their way into the mainstream. Black-and-white photography turns to color in the hands of cinematographer Dan Lausten, and following his usual bent, del Toro creates images that are both detailed and bizarre.
De Toro gives his movies their own worlds and Nightmare Alley is no exception -- which is not to say that the movie can be taken as an unalloyed success. More on that later.
The story twists its way through a variety of complications. Lost and on the run, Stan Carlisle (BradleyCooper) stumbles into a carnival presided over by Clem Hoatley (Willem Dafoe). Hoatley specializes in displaying deformed fetuses he preserves in alcohol. His favorite: a three-eyed baby he calls Enoch.
Stan learns the carnival trade when he meets Pete Krumbein (David Strathairn) and his wife Zeena (Toni Collette). Zeena quickly seduces Stan, who immediately senses opportunity in a special code Pete devised to create the illusion of mind-reading.
Money and fame, the twin engines of American dreaming, loom.
Needing a helpmate for his career, Stan takes up with Molly (Rooney Mara), a carnival worker with a grotesque occupation. She makes her living surviving electrocutions as part of the carnival’s sideshow repertoire.
Mary falls for Stan’s charms and the two head for Chicago. Stan ignores the warnings of strongman Bruno (Ron Perlman) who sees himself as Mary's protector. Bruno threatens harm should Mary be hurt.
Unfazed, Stan trades his carney clothes for a tuxedo; he headlines a popular nightclub act as a premier mentalist.
One of the movie’s running themes centers sin and hellfire or their metaphoric equivalents as found in 1930s America.
Consider “the Geek,” the most desperate of souls, a pitiful fellow who carnie bosses steer into the lowliest of employments, hooking them with drink and addictive drugs. A filthy caged man, the Geek bites the heads off live chickens, an act shown by del Toro but never seen in the original.
The Geek becomes a symbol of condemnation; he represents the hideous fate of sinners and Stan provides plenty of reason for us to consider him a sinner.
In Chicago, the movie adopts a new look, displaying fabulous Art Deco interiors and upscale hotel rooms where Stan and Mary are living the good life. It also begins to drag — albeit with a bright spot.
Stan encounters Lilith Ritter (Cate Blanchett), a sophisticated Chicago therapist who tapes her sessions with her clients. Stand suggests a partnership in which the tapes will help him bilk the wealthy, notably a rich man (Richard Jenkins) who’s guilt-ridden about the death of his wife.
Note: Is there anything Blanchett can’t do. She makes a great femme fatale.
You needn’t be a mind reader to see where all of this is headed, but the film has less to do with story than with ambiance, seedy carnival life juxtaposed against the sleek world to which Stan aspires. Cooper makes it clear that Stan's ambition quickly can slide into desperation.
Del Toro’s screenplay gives Stan a motivational backstory but it allows scenes to play out to the point where impatience sets in.
Now, I’m going to get to the hub of things, belatedly I suppose, probably because I respect del Toro's talent and commitment to cinema.
Nightmare Alley limps its way through a story that needed to move quickly, vanquishing the opportunity for second thoughts or over-evaluation.
At times, del Toro’s images seem frozen in their dark beauty. Del Toro has made a noir movie in which ugliness is aestheticized. A carnival becomes a lurid dreamscape and the Deco interiors of Chicago are airless, so highly designed they can feel sterile.
Slow and dawn-out, Del Toro's version sometimes suffocates under the director's lavish treatment. Nightmare Alley is less a neo-noir outing than a brilliant display of lighting and production design.
Noir had the high-contrast sheen of lurid pulp. Del Toro’s version inflates the atmosphere and deflates the movie as a result. By the end, he almost turns Nightmare Alley into something I wouldn't have thought possible, noir as coffee-table book.
Posted by Robert Denerstein at 3:35 PM