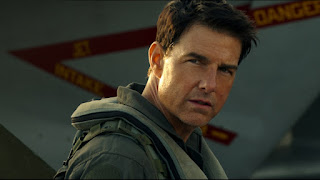 Top Gun: Maverick should once and for all prove how easy it is to make a mega-hit. All you need is Tom Cruise, lots of sleek fighter jets, a gifted camera team, and an attractive supporting cast that knows how to trade macho barbs.
OK, I'm kidding.
If Cruise is the last remaining movie star, as some would have it, it could be because he’s whip smart about managing his career. Besides, a movie as slick as Top Gun: Maverick requires more than a little behind-the-scenes talent.
Since the release of the original in 1986, few viewers have been clamoring for a sequel. But now we have one, and it deserves credit for finding the right gear: The movie brims with exciting aerial action (not CGI), its own ideas about heroism, and plenty of Cruise charisma.
Although Cruise isn’t entirely immune from aging, he retains the pluck and dentist’s dream smile that upped the octane of the original — and many other Cruise hits.
Taking over for the late Tony Scott, director Joseph Kosinski infuses the movie with a welcome blast of youth. This time, a new generation of actors (Glen Powell, Lewis Pullman, Jay Ellis, and Monica Barbaro among them) portray the best pilots in the world.
The dramatic key to the new movie involves Maverick’s relationship with a younger pilot, Miles Teller's Bradley (Rooster) Bradshaw.
In what amounts to a disregard for avian identity, Rooster, we learn, is the son of Goose, a Maverick pal who died in the original movie. Goose's death, referred to in a flashback, left Maverick wrestling with guilt.
Maverick’s inner struggles aside, no one attends a Top Gun movie in search of psychological revelation. Kosinski and his team ably create the visceral excitement of watching jets in dog fights. Though preposterous, the movie’s major mission cranks up lots of tension.
The supporting cast includes Ed Harris (briefly) as an admiral who tries to ground Maverick’s career. Jon Hamm portrays the commanding officer of the unit to which Maverick is reassigned after another run-in with Naval authority.
Maverick has a protector in the Navy, Val Kilmer's Ice, his former rival from the first movie. Now an admiral, Ice makes sure that Maverick, an officer with a taste for improvisation, survives in a rule-bound military society.
In a near-nostalgic moment, Kilmer and Cruise share a scene in which Ice types his part of the conversation onto a computer screen before forcing himself to speak.
For most of the movie, Maverick trains younger pilots to trust their instincts so that they can perform seemingly impossible tasks without thinking.
A bit of romance softens the proceedings -- or, at least, tries to do that. Jennifer Connelly plays an admiral’s daughter and potential love interest for Maverick. She owns a bar where the pilots gather. She also has a teenage daughter (Lyliana Wray).
The young cast — particularly Powell's  “Hangman” — blends perfectly into a movie that glorifies roguish individuality over the increasingly machine-like nature of combat.
Moreover, the tough-love conflict between Maverick and Rooster creates sparks, recalling the original without feeling as if it's repeating it, a feat the movie in general accomplishes.
Early on, Harris’s character claims combat soon won’t involve human pilots. In a drone-dominated future, there’s no place for guys such as Maverick, men who insist that the pilot makes the crucial difference, not the plane.
Guess who turns out to be wrong?
Top Gun Maverick probably will roar at the box office. Why not? It’s so obviously scaled for the big screen that there's no reason to take it too seriously -- at least not as a portrait of military life or of global conflict.
To put it another way, in the world of movies, Top Gun: Maverick hits the mark, maybe because neither the filmmakers nor the actors are flying on auto-pilot.
Posted by Robert Denerstein at 6:10 PM