Transcending the ranks of campus comedy 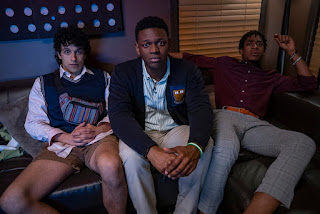 Emergency is a comedy made enjoyable by a trio of actors (Donald Elise Watkins, RJ Cyler, and Sebastian Chacon who bring zing to the byplay in what could have been another teen comedy — albeit one built around issues faced by black college students. A trio of housemates try to deal with a major problem: What to do about a drunken white girl who has wandered into their house and lies in a near-comatose state on their living room floor. Call the cops? Not a good idea says Cyler’s Sean who's wary about how the police might read the situation. Black guys. White girl. There goes any benefit of the doubt. The presence of this girl disrupts Sean's plan for two of the three housemates to visit every campus party on the eve of spring break. Director K.D. Davila guides this Sundance favorite through a couple of tonal shifts that deposit the story on a beachhead where she can deal with conflicting black approaches to manhood (studious and street-wise to put it in the  broadest terms) and the relationship of black students to the rest of fictional Buchanan College. Davila gets close enough to success to lift Emergency out of the crowded college gag-reel genre. Keep an eye on Cyler (Me Earl and the Dying Girl and The Harder They Fall. He’s a scene-stealer who tempers a comic performance with a knowing slice of bitterness.
Posted by Robert Denerstein at 2:35 PM