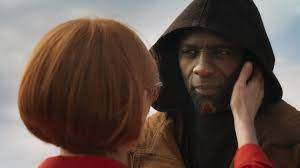 Australian director George Miller (The Road Warrior movies) travels to Istanbul to tell a story loosely based on an A.S. Byatt collection of short stories, The Djinn in the Nightingale's Eye.  Miller and his team put a lot of effort into creating a look that's designed to amuse, enchant, and sweep us away.
Despite an intriguing theme about the role of storytelling in our lives, Three Thousand Years of Longing turns out to be one of those movies whose parts don't add up to a satisfying whole — and not all the parts are captivating, either.
Miller teams two fine actors in a tale about an academic (Tilda Swinton) and a Djinn (Idris Elba) who encounter one another after Swinton's Alithea Bonnie purchases a small bottle during a visit to Istanbul's Grand Bizarre.
Alithea returns to her hotel room, tries to clean up the bottle, and, lo, a genie emerges. The skeptical academic, who studies the role of narrative in mythic literature, is granted three wishes. She's reluctant to use them.
While waiting for Alithea to make up her mind, the Djinn tells Althea stories, some of which Miller beautifully realizes while others falter. The imaginary Arabian backdrops often are more interesting than the stories that unfold in front of them.
A variety of characters emerge as the Djinn tells Alithea about his previous attempts to free himself from his bottle: If he grants three wishes, he'll be free. One tale involves a ravenous and infantile sultan who surrounds himself with portly women.
Miller is a talented and important director who has veered off the Mad Max track before -- notably with Babe: Pig in the City (1998) and Lorenzo's Oil (1992). He previously tried his hand at fantasy with 1987's The Witches of Eastwick.
After his triumph with Mad Max: Fury Road (2015) and with another Road Warrior movie looming, it's easy to understand why Miller wanted a change of pace with a story that's meant to be savored rather energized by speed, the difference say between sipping a glass of wine and downing it with one mighty swig.
Put another way: I was rooting for Three Thousand Years of Longing but had difficulty sustaining interest as scenes between Swinton and Elba (shown in various sizes and often with smoke rising from his body) bogged down.
At once majestic and knowing, Elba creates a memorable Djinn but Swinton's Alithea proves a bit dull, an academic who longs for love and companionship.
Miller is too talented not to find some masterful moments but the movie suffers from a lack of drive, and when Alithea and the Djinn return to London, the screenplay expands to include a romantic dimension in which the fantastical and the mundane try to merge.
Generous viewers may give Miller a pass. I'd have no quarrel with those who are so inclined but, for me, this story about the transcendent importance of stories seldom made it feel as the stakes were vital.
Besides, the best way to celebrate stories is to tell a great one. Three Thousand Years of Longing falls short in that regard.
Posted by Robert Denerstein at 1:35 PM