Stallone takes on a superhero role 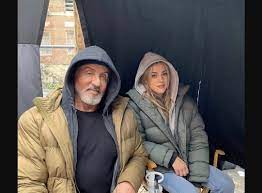 If I ran a film festival, I'd assemble a tribute to Sylvester Stallone. And, no, I'm not kidding.
I'd invite the star and include five of his movies in my festival schedule: The Lords of Flatbush (1974 ), Rocky (1976 ), First Blood (1982 ), Cop Land (1997), and Creed (2015).
I'd love to hear Stallone discuss a career that has spanned more than 50 years and has included wildly popular movies, as well as movies that most critics have disparaged, 1983's Cobra, for example.
All of which brings me to Samaritan, a movie that wouldn't come close to making my greatest-Stallone-hits list but one that allows the actor to flex some superhero muscle -- and pretty much get away with it.
Happily, Samaritan does not spring from the pages of either Marvel or DC Comics. It originates from a series of graphic novels by Bragi F. Shut, who also wrote the movie's screenplay.
In a way, it's a relief to see a comic-book movie that doesn't feel as if it's aspiring to be summer's biggest "event." Credit Samaritan with knowing its place in the cinematic universe.
A low-rent helping of grunge and action, Samaritan unfolds on the mean streets of Granite City, the urban dystopia where teenage Sam (Javon Walton) is bent on finding Samaritan, a superhero who has been presumed dead for more than 20 years.
Sam believes that Samaritan is very much alive and living incognito as Joe Smith (Stallone) in the same low-income neighborhood where Sam and his single mom (Dascha Polanco) reside.
A lively Walton proves convincing as a street kid who develops a relationship with the gruff but caring Joe. Joe's occupation: garbage man, work that allows him to find and repair discarded objects, say a radio that has seen better days.
Pilou Asbaek portrays the villainous Cyrus, a criminal who wants to revive the spirit of Samaritan's dead twin brother, the evil Nemesis. Epic enemies, the brothers didn't get along.
Oh hell, forget the details. The plot makes some sort of sense -- if that's not too strong a word -- when you're watching the movie.
It takes a while for Stallone to curl his upper lip into a snarl but the actor fulfills the screenplay's demands with old-pro ease while allowing signs of age to add some creak to his step.
Director Julius Avery keeps things moving toward a third-act surprise as Samaritan traverses its dreary cityscape, an over-worked cliche of urban decay.
Enough. If you're amenable to stepping outside the normal boundaries of what you might consider a good or bad movie, Samaritan -- showing on Amazon Prime -- might keep you involved for much of its economical 99-minute running time.
And don't forget to attend my Stallone tribute, providing my imaginary film festival ever takes place.
Posted by Robert Denerstein at 11:10 AM