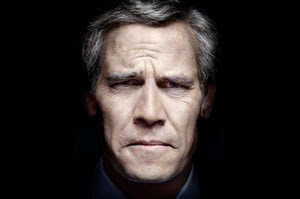 A couple of years ago, while waiting on line at the Sundance Film Festival, I struck up a conversation with a film buyer who was visiting from Germany. After the obligatory complaints about the inconveniences of Sundance, we began talking about the films we'd seen. The film buyer, who previously had worked as a film critic, told me that he had a new 10-minute test for movies. "If I can't tell why the movie was made within the first 10 minutes, I move on,'' he said. The rule covers a lot of ground. A film could be made for personal reasons, to tell a compelling story, to express a sense of outrage or to envelop an audience in fantasy. My line mate didn't seem to care what motivated the filmmaker, he just wanted to know the reason he was being asked to surrender a couple of hours of his time.

That conversation kept flashing through my mind as I watched "W.," director Oliver Stone's take on George W. Bush. Why would someone want to make such a film, particularly at the end of Bush's eight-year watch? And what was there to say about Bush, the younger, anyway? His approval ratings are disastrously low; the country is in terrible financial shape and the presidential candidate from Bush's own party seems intent on persuading voters that he bears no resemblance to the man he hopes to succeed. Going in, I figured Stone -- the great conspiratorial thinker of the movies -- must have something new and exciting to say about the man called "dubya."

Well, not really. Here's the skinny on W, according to Stone: Bush was a bourbon-swilling party animal who coasted through life until he had a religious conversion, depicted by Stone as a kind of Road to Damascus revelation experienced by a hungover Bush during an attempted three-mile run. The born-again Bush finds Jesus, stops drinking and develops some serious ambition.

But being reborn doesn't solve all Bush's problems; He still struggles with a daddy thing, a sense that he'll never do enough to impress his father, called Poppy in the movie and better known to us as the nation's 41st president. W.'s confidence and trust of his gut represent a reaction against his father's propensity for caution. And, in the end, Bush -- called "Jr." by his father -- seems a slightly pathetic, somewhat bewildered man who can't get a grip on his presidency or on his personal psychology.

As historical interpretations go, that's not exactly a groundbreaker.

Stone constructs his movie around a sometimes rollicking series of vignettes: Bush's party years at Yale; his floundering years in Texas; his unsuccessful run for Congress and more, all set against the backdrop of Bush's presidency, presented in the form of greatest hits. Surprisingly, 9/11 is excluded.

The movie requires a bravura turn from the actor playing Bush, and Josh Brolin delivers, even though he looks too old to be credible as a college-age Bush. Brolin captures Bush's voice and mannerisms and even manages to look a little like his subject, at least when the camera keeps a respectful distance. Brolin seems to understand Bush's bravado and self-doubt. In many of the scenes, Bush is photographed while eating, as if this most insecure of presidents can't fill himself up. There's a void in Bush's personality, the place that presumably should have been filled by his father's love. James Cromwell as Bush, the elder, avoids mimicry, but I couldn't really buy him as Bush 41.

The rest of the cast comes off like talking statues in a wax museum. We're watching imitations, not performances. I can't really fault the actors because they're playing cardboard cutouts: Richard Dreyfuss as Vice President Dick Cheney; Thandie Newton as National Security Advisor Condoleezza Rice; Toby Jones as Karl Rove; and Jeffrey Wright as Colin Powell. The screenplay by Stanley Weiser, who previously wrote "Wall Street" for Stone, seems void of subtlety, so much so that "W." often plays like broad comedy rather than thought-provoking drama.

So why did Stone tackle George Bush? I'm not sure. Surely not to tell us that an appetite for oil made Cheney a fierce proponent of the Iraq War. Certainly not to suggest that Colin Powell was never really comfortable with his role in the Bush White House. Did we need to be told once again that evidence was distorted to convince a gullible American public that Saddam Hussein had weapons of mass destruction? Stone fires off these salvos in a swirl of scenes in which Bush meets with his cabinet, sometimes reminding them that he's in charge when it's obvious that he's not.

"W." exhibits some of the urgency we expect, but Stone's on a frantic dead-end journey in which tone varies wildly. He even includes fantasy sequences in which Bush, who owned the Texas Rangers for a time, imagines himself as a center fielder making spectacular catches. The longer the movie goes on, the more George Bush seems like a dangerous and none-too-bright Willy Loman of politics, manipulated by others, doomed to play second fiddle to Poppy and perhaps even harboring a few good intentions.

At the end of the movie, you may find yourself asking, "That's it?" This is one time when Stone (J.F.K. and Nixon) could have used a good conspiracy.


AND WHILE WE'RE ON THE SUBJECT OF POLITICS....
I'm not going to dwell on "Boogie Man: The Lee Atwater Story," a riveting new documentary about the ambitious political operative who tutored Karl Rove and who gave new meaning to the word "unscrupulous." All I'll say is that director Stefan Forbes has created a documentary that's as absorbing as fiction. He charts Atwater's unlikely rise through the Republican Party and paints a chilling portrait of a man who seems hollow of just about everything except for a love of R&B (he played guitar) and blind ambition. I said Atwater's life plays like fiction. On second thought, maybe I'm wrong about that. If a novelist had invented Atwater, the character probably would have come off as too much of a striver to be believable. Want an epitaph for the political operator who used Willie Horton to sink Michael Dukakis' candidacy in 1988? Try this: Atwater did not seem to know any shame, unless, of course, he was attempting to heap it on others. Atwater died of a brain tumor in 1991. He was 40.
Posted by Robert Denerstein at 12:01 AM

Josh Brolin did a convincing Dubya, though he reminded me a lot of his cowboy character from No Country for Old Men... over all, i don't doubt that 'W.' will have the effect Oliver Stone desired

I am amazed that people don't know how to think for themselves anymore. Or come to the point of what is really truth in any given situation. But maybe it's just about living in a dream world that isn't real is where people feel comfortable.

I remember watching John Wayne with gramps. He was a real man. To see truth and to state wasn't a crime. Nor did anyway do anything but realize they were way wrong. They swallowed their pride and got on with their life. But now, it's all about who can be the greatest I can't control my bowel movements and that is supposed to be a wonderful thing.