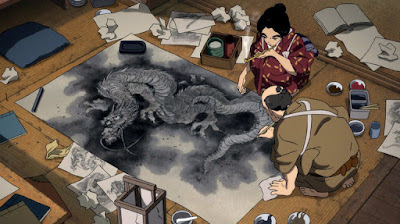 Posted by Robert Denerstein at 6:05 PM No comments: 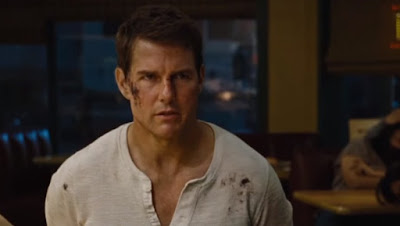 Posted by Robert Denerstein at 3:35 PM No comments:

This grouchy Swede has some heart 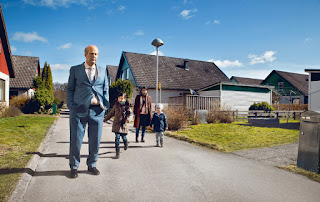 Swedish director Hannes Holm focuses on one of the world's great grouches in A Man Called Ove, a movie that turns a gruff and demanding character into a man with a big heart -- both metaphorically and literally. Personal redemption isn't exactly a novel twist for a story, but Holm adds enough ingratiating charm to keep a familiar tale on track. Adopting what presumably is intended as an oddball storytelling technique, Holm reveals Ove's life in flashbacks that occur during the 59-year-old widower's frequent attempts at suicide. Ove slowly recovers his humanity with help from a new neighbor (Bahar Pars), a pregnant Persian immigrant woman. We also learn that Ove's late wife (Ida Engvoll in flashbacks) was a teacher known for getting the best from her students. A love story and an ode to the redemptive powers of human connection, A Man Called Ove gains gravity from Rolf Lassgard's performance as Ove, the kind of fellow who'd sever a long-term friendship over a pal's choice of a car (a Volvo over a Saab). Ove's exacting demands on the tiny community in which he lives shield him from feelings he has no desire to face. A Man Called Ove may not make for adventurous film viewing, but it proves a pleasant enough diversion about a man who spends most of his time being as unpleasant as possible.
Posted by Robert Denerstein at 1:10 PM No comments:

Nate Parker's Birth of a Nation strikes a powerful chord. 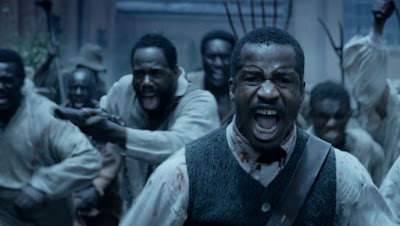 After a smashing debut at last year's Sundance Film Festival, director Nate Parker's Birth of a Nation sold to Fox Searchlight for a record $17.5 million. Although the reviews weren't uniformly positive, the movie -- which tells the story of the 1831 slave revolt led by Nat Turner -- seemed the perfect antidote to a year that began with a mixture of commentary and protest about the inescapable whiteness of the Academy Awards.

A prestigious rollout seemed certain, and then news surfaced about a rape allegation dating back to Parker's college days at Penn State. Although he was acquitted, Parker was forced to address questions about himself rather than about his movie.

The tragedy of all this has less to do with the impact on Parker's reputation than with the possibility that news about Parker's personal history will in some way relieve audiences of responsibility for acknowledging the painful chapter of American history that the film depicts.

This is not to say that Birth of a Nation is masterpiece, but that it is a film that should be part of an important discussion. The movie's achievement not only involves the power of its story, but the way in which Parker brings us close to his characters.

In Parker's hands -- at least most of the time -- Turner is less a symbol of the fight against injustice than a living, breathing man with hopes, aspirations and a deep love for both his mother and the woman who would become his wife. He is man before he's a rebel.

Birth of a Nation underscores the humanity of those who were ravaged, but it also exposes the institutional structure that made such exploitation possible. If that's not an entirely new revelation, it bears repeating.

In telling early imagery, we see young Nat playing with the son of the white plantation owner. Their childhood friendship seems free-flowing and genuine, but we know it won't last because the white boy will grow up to "own" Nat Turner.

We quickly learn that young Nat was an exceptional child. He could read at an early age. As a result, the mistress of the Southampton, Va., plantation where Turner was enslaved (Penelope Ann Miller encouraged Nat's development. She instructed the youngster to steep himself in the Bible, the only book she deemed suitable for a person of his race.

When Turner matured, he became a preacher who offered solace to his fellow sufferers; he also offered a means for the owner of the by-then-faltering plantation (Armie Hammer) to enrich himself.

At the suggestion of a white preacher, Hammer's Samuel Turner "rented'' Nat to others as a kind of novelty, a black preacher who could convince the enslaved that a better world awaited them in the next life. The white hope was that those who were enslaved would put aside any notions of a better life in this go-round.

Played by Parker with a watchful gaze, Turner learns to negotiate plantation perils. At one point, he persuades Hammer's Samuel Turner to purchase a teen-age slave that had caught his eye. Cherry (Aja Naomi King) later becomes Nat's wife, a relationship the movie makes clear was held in little respect by many slavehoders.

Of course, the movie must show the brutalities that led to Nat Turner's revolt. These include rapes of black women, a horrible attack on a black slave who goes on a hunger strike and many other indignities.

Hammer's Samuel is depicted as one of the kinder slave holders, but even he can't resist a vigorous defense of the status quo when he learns that Nat has baptized a white man, an act considered scandalous.

Nat receives a severe whipping for bringing a white man to faith. Soon after, he rebels, leading his small band in a killing rampage that results in the deaths of some 55 whites.

Parker spares us some of the hard-core butchery of Turner's revolt, but gives us enough to suggest the level of fury that had been unleashed among those who had been so ceaselessly oppressed.

By the end, Parker can't resist sacralizing Turner's death. Turner was caught, hanged, and -- in this version of the story -- he triumphs over his cruel surroundings, presumably with a vision of divine justice that serves as both his vindication and an act of transcendence.

Third-act hagiography aside, the most most interesting achievement in the script by Parker and Jean McGianni Celestin* involves its depiction of the daily horrors of slavery.

Birth of a Nation takes its title from D.W. Griffith's silent, 1915 Civil War epic, a movie justly deemed racist for its demeaning depiction of blacks and for taking a lionizing approach to the Ku Klux Klan. The impacted ironies in Parker's choice of a title presumably were intended.

Following 12 Years A Slave, this Birth of a Nation adds to the small but significant list of movies that are trying to come to grips with a painful and shameful part of the American past.

As such, it's a powerful drama about a man driven by a burning faith that demanded that he call those who oppressed him into the severest of accounts.

*Celestin, a roommate of Parker in college, initially was convicted of the rape charges, but the case was later dropped on appeal. I won't belabor a complicated story here. Look up Parker and Celestin, and you'll find no shortage of stories and commentaries about what has become a topic of national conversation about sexual assaults on campus.

Posted by Robert Denerstein at 3:35 PM No comments: