A boy longs for music in colorful 'Coco'

A Latino cast of characters fills Disney/Pixar's holiday entry. Oh, and by the way, the holiday is the Day of the Dead. 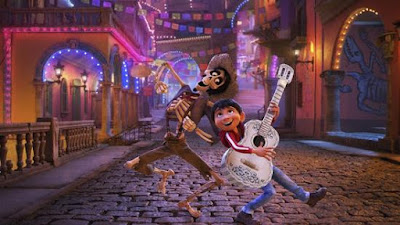 An animated movie built around Mexico's Day of the Dead and a story in which ruthless ambition and murder play pivotal roles? At first blush, such a movie seems like something that might have sprung from the imagination of director Tim Burton, no stranger to blending macabre touches into animated fare.

Not to worry. Disney/Pixar's Coco, which includes what might have been darkly hued ingredients, plants its feet firmly in a colorful world that serves as a backdrop for the movie's foray into Mexican culture. The Day of the Dead (Dia de Los Muertos) may be one of Coco's key events, but the movie puts its emphasis on family ties that extend through generations and, ultimately, serve as a source of strength for the living.

Guess what? The whole thing more or less works. Coco, Disney's holiday offering from Pixar, makes for an engaging entry into the canon of vividly realized Pixar animated features. To say that Coco bursts with visual diversity and color understates the case.

The story centers on Miguel (voice by Anthony Gonzalez), a boy who wants to follow in the footsteps of his hero, a recently deceased but enormously popular singer named Ernesto de la Cruz (voice by Benjamin Brett). De la Cruz became a singing sensation; young Miguel comes to believe that he's the great-great grandson of the venerable de la Cruz.

The problem: Miguel's family has gone into the shoemaking business and has forbidden all musical activity lest such frivolity upset Mama Coco, the shriveled family matriarch who gives the film its title. An explanation of the family's anti-musical stance would require spoilers. All I'll say is that the screenplay provides one.

According to the movie, the Day of the Dead marks the occasion on which the spirits of departed ancestors are supposed to return to mingle with their still-living loved ones. A series of plot machinations involving a trip to a local cemetery finds Miguel headed in the opposite direction.

Instead of awaiting the visits of the departed, he visits them in the Land of the Dead.

Much of Coco takes place in the Land of the Dead, a domain Disney treats as if it had been conceived as an addition to one of its theme parks, a fantastical world dominated by fully dressed skeletons, dazzlingly bright colors, vaulting towers, engaging characters, a busy transportation hub, and a villain who's more pompous than scary.

Miguel hopes his trip to the Land of the Dead will be productive: He wants to meet de la Cruz, receive the great singer's blessing and return home to pursue his musical dreams. But Miguel also meets Hector (voice by Gael Garcia Bernal), a tattered skeletal presence who's on the verge of being forgotten and who may have something to do with Miguel's quest.

Hector is that sorriest of souls. He'll be forgotten because there's no one to put his photo on a family shrine; he won't be able to cross the bridge that connects the living and the dead -- an arching display of marigold petals -- for a visit with his relatives. He'll vanish from his family's records, as if he never had lived.

I can't say exactly how kids will react to a story that makes room for jealousy, ego, and deceit, but I'm guessing that Coco's bright colors and Miguel's unflagging exuberance will stave off any bouts of kiddie fright and depression.

Besides, the skeletons in The Land of the Dead lean aren't immune from cartoonish behavior, coming apart and reconstituting when bones fly in different directions. These skeletons retain the personalities and relationships that they enjoyed in life. They're a lively bunch who give the lie to any notion that an afterlife might involve eternal rest.

Among the "dead" characters, Miguel finds his great-great grandmother (Alanna Noel Ubach). On the living side, we meet Miguel's grandmother (Renee Victor), a woman who serves as the family's enforcer, but who never fails to accompany discipline with robust expressions of love.

I've read that the filmmakers worked hard to incorporate authentic details of Mexican culture into the story and to sprinkle the dialogue with Spanish. Co-directed by Lee Unkrich and Adrian Molina, the movie also includes touches that anchor the story in the Land of Disney, notably a sidekick Xolo dog named Dante that accompanies Miguel on his adventures.

In Coco, Disney and Pixar realize a complex and visually dense world that contains music and musical numbers without being a musical.

The movie may encourage youngsters to ponder the perils of succumbing to the blinding light of celebrity and it shows -- in obviously literal fashion -- that there's much to be gained from honoring and remembering those who have gone before us. And, of course, there's the Disney value that transcends all cultures: pursuing a dream.