A child goes missing, a society is revealed

A couple in the Russian movie Loveless proves profoundly neglectful. 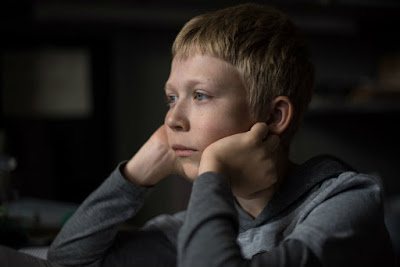 No one who sees the Russian movie Loveless will find the title misleading.

Director Andrey Zvyaginstev (Leviathan) skillfully paints a powerful portrait of characters for whom self-interest trumps everything — even the welfare of a child.

Full of chilly winter images, Loveless tells the story of two warring parents (Alexey Rozin and Maryana Spivak), a husband and wife so preoccupied with their own lives that they’ve become indifferent to the life of Alyosha (Matvey Novikov), their 12-year-old son. Early on we see the boy standing in a darkened corner of his parents' Moscow apartment; he cries as they engage in a vituperative battle.

Not long after this painful night, the boy goes missing.

But Loveless isn’t so much about the search for the boy as it is about the lives of two people who clearly never should have been parents in the first place. Rozin’s Borris worries that his boss, a staunch Christian, will fire him if he learns about Borris’ impending divorce.

For her part, Spivak’s Zhenya alternates between fury at her estranged husband and involvement in a relationship with a new lover (Andris Keisha), a guy who seems to have a bit of money and who expresses no interest in her role as a mother.

Boris, too, has taken up another relationship. He’s already gotten a woman named Masha (Marina Vasilyeva) pregnant. She's pushing for all his attention.

Zvyaginstev, who allows images to linger to the breaking point, seems less interested in making a police procedural — the police eventually become involved in the search for the boy — than in creating a grim picture of society in which values have dangerously eroded.

The fate of poor Alyosha makes itself felt in nearly every frame of Loveless — even when the movie's focus is elsewhere. That's part of why Zvyaginstev succeeds in indicting not only two horrible parents but the society whose values — or lack of them — produced such terrible neglect.

For the record: Loveless earned a spot as one of this year’s five nominees for a foreign-language Oscar.