A new entry into the revenge genre

A French director fills the screen with blood and tension. 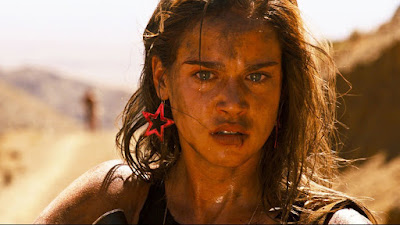 First-time French director Coralie Fargeat has delivered one hell of a calling card, attacking the screen with Revenge, a debut movie that leaves a bloody, indelible impression. Some will see Fargeat's movie as a feminist act of turning the tables, a movie about a woman whose fight for survival pits her against three men, all of whom deserve whatever punishment they get.

But however you choose to view Revenge, it will be difficult to argue against the movie's kick-in-the-gut power.

Movies such as Revenge don't so much tell stories as they find the ingenuity required to keep the action heated, raw and, above all, moving.

A bare-bones plot kicks off when the super-hot Jen (Matilda Lutz) is raped by a hunting buddy (Vincent Colombe) of a man (Kevin Janssens) with whom she's having an extra-marital affair. Another thuggish hunter (Guillaume Bouchede) ignores the whole thing. Instead of aiding Jen, he turns up the volume on the TV.

None of this was supposed to happen. Janssen's Richard hoped to dispense with his boy-toy before his hunting companions turned up at his isolated, aggressively modern desert home. When they arrive a day early, the two men disrupt the sexual interlude that the square-jawed Richard hoped to conclude before setting out to find four-legged prey.

Initially, Jen seems as bubble-headed as she is beautiful, strutting about in a bikini and showing no self-consciousness about being ogled.

Don't be fooled. Fargeat has more in mind than pandering to male fantasies -- at least not those involving sex.

Instead, she serves up a stylishly slick helping of tension, violence, and action in a movie that's not (I repeat "not") for the squeamish.

I don't want to say too much about what happens in the parched expanses of the desert but I'll warn you that there are images that will tempt you to look away from the screen. In one such, Fargeat uses an excruciating close-up to show a man digging into an open wound to remove shards of glass from his foot.

I mention this by way of warning you that there's enough plasma spilled in Revenge to stock a blood bank.

Fargeat offers just enough characterization to create a bit of depth. Initially, Jen seems like a bimbo who knowingly has involved herself with a married man. Fargeat even slips in a Lolita-like shot of Jen with a lollipop.

Richard seems the perfect male mix of success and hypocrisy, a philanderer who calls his wife from his desert retreat, feigning marital loyalty and familial concern. Colombe's Stan -- the leering rapist who attacks Jen when Richard leaves the house for a couple of hours -- eventually has second thoughts about his brutality. Only Bouchede's character seems too dim-witted to care about what's happening.

Revenge is best seen without much advance knowledge about what transpires. I won't say too much about Jen's transformation into a warrior, although I will tell you that it begins with a whopping shock.

Shot in Morocco, Revenge makes great use of desert settings and cinematographer Robrecht Heyvaert wields his camera with remarkable deftness.

Whipsmart when it comes to technique and visual wit, Fargeat has made a movie that's tense, lurid and exciting. Not everyone has a taste for this kind of movie, but if you do, Revenge definitely should satisfy.