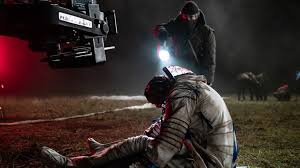 I know we're living in a time in which borders between genres are collapsing and critics often take a meta approach in which every movie becomes a commentary on every similar movie that preceded it. But as limited as that approach can be, it's necessary to begin by a review of the Russian movie Sputnik by citing a precedent.  Sputnik feels like an Eastern European cousin of Alien.

Unlike Ridley Scott, director Egor Abramenko doesn’t make a secret out of revealing the movie’s alien creature; he also modifies his idea by leaving space and settling his film in the confines of a laboratory on Earth.
Fortunately, what’s most interesting about Sputnik has less to do with its sci-fi story than with the fact that it takes place in 1983 prior to the dissolution of the Soviet Union. Lots of heavy Soviet oppression can be felt as Abramenko makes references to bureaucratic in-fighting and ruthless military intrigue.
The story begins in earnest when a Soviet space capsule crashes to Earth with only one surviving crew member (Pyotr Fyodorov) aboard. It doesn’t take long for the Soviets to realize that the body of Fyodorov’s Konstantin has been taken over by a slimy alien that emerges at night, leaving the otherwise normal Konstantin unconscious and unable to remember anything about his space travels.
Enter doctor Tatiana Yurievna (Oksana Akinshina), a woman who's enlisted to help the Soviets separate the alien from its human host.
Not surprisingly, the story includes a not-so-hidden agenda: The officer  (Fyodor Bondarchuk)  in charge of the secret installation where the cosmonaut is being held in isolation wants to weaponize (what else?) the alien.
Liberal amounts of gore and a horrific twist involving convicts make the movie creepy, although at times the plot verges on parody and the alien can seem slightly pathetic as it hoists itself on its forearms and drags across the polished floors the laboratory where it's being studied.
And Akinshina gives the movie a center that, at times, is more intelligent than the script. Sputnik proves a curiosity in a time when our biggest fears have less to do with space than with very earth-bound viruses.
It almost makes you nostalgic for the simpler terrors of yesteryear.