A powerful portrayal of a working-class writer 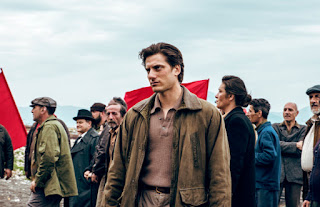 These days when we talk about big movies we're usually referring to comic-book extravaganzas stocked with superheroes and explosive special effects. It's unusual to find a "big" movie that allows its main character to unfold against a sweeping backdrop of politics, change and social upheaval.
Perhaps that's why director Pietro Marcello's Martin Eden qualifies as a welcome throwback, a movie that's scaled to cover lots of ground and touch a variety of subjects -- all revolving around a writer (Luca Marinelli) who emerges from Italy's  working class.
But scope isn't the only distinguishing characteristic Martin Eden brings to the screen. It's an Italian movie with an unexpected pedigree. Marcello's movie is a big-screen adaptation of a 1909 semi-autobiographical novel by Jack London.
Yes, I know that sounds improbable, but Marcello and his leading man mostly succeed in creating a story that boils with incident and ideas, some a bit half-baked, but ideas nonetheless.
Marcello does a surprisingly good job of shifting London's story to the area around Naples, adding plenty of color and grounding the story in a bit of  working-class romanticism. Occasionally, Marcello shows us the real faces of the residents of Naples, perhaps a bow to Italy's Neo-Realistic tradition.
Marinelli gives a robust, physically dominating performance that holds the movie together. A sailor by trade, Martin's artistic aspirations are triggered when he becomes involved with a well-to-do family.
Martin falls for Elena (Jessica Cressy), the family's daughter, an educated woman who has been exposed to a genteel life of manners. She introduces Martin to Baudelaire and he's off and running on his own, reading everything he can get his hands on.
He must be on his own because his brother-in-law (Marco Leonardi) throws him out after Martin refuses to join his brother-in-law's business. Martin won't spend his life consumed by work-a-day concerns. When he needs money, he heads out to sea.
An enthusiastic autodidact, Martin eagerly consumes heady theories. He becomes enthralled with the work of Herbert Spencer, a 19th-century philosopher who concocted the theory of social Darwinism and became a champion of individualism.
Marco refuses to allow class differences -- one of the movie's more obvious subjects -- to thwart his desire to improve himself through self-education. He has a near-boundless faith in the strength of his individuality, and he won't be dissuaded from writing stories that Elena finds too "raw" and uncompromising.
Martin's early work arouses little interest but the self-taught writer perseveres until the day a magazine editor decides to publish one of his stories. An authorial career is launched and, in its latter goings, the movie will see Martin shift to a bombastic narcissist whose belief in himself begins to verge on parody.
All of this takes place against a backdrop of philosophical struggle. Eventually, Martin acquires a mentor. Russ Brissenden (Carlo Cecchi), a socialist and a poet, pushes Martin into the world of politics.
Martin, however, remains true to his belief that the individual supersedes the collective and the movie's politics (perhaps clearer to an Italian audience) become a bit muddy. The best that can be said is that Martin seems to scorn anything that might define him as a member of a group.
The movie loses steam in the final act when Martin allows success to go to his head. The transition from authenticity to an insufferable commitment to his own rugged image never seems entirely convincing, even though Martin is aware of the ways in which his life has become preposterous.
But that doesn't make the story and its cast, particularly the magnetic Marinelli, any less appealing. Flaws aside, Martin Eden has the one thing its title demands, a powerful main character and a director who knows how to get the most out the actor who's playing him.
Posted by Robert Denerstein at 8:10 PM