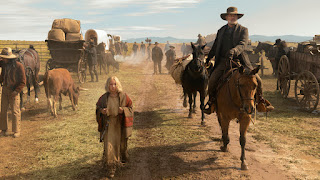 Set in Texas during the years immediately following the Civil War, News Of the World takes place against a backdrop of lingering southern bitterness. In this often-ugly world, law can be an afterthought, bigotry often surfaces and a lone traveler never moves escapes danger.
Who better to navigate such treacherous territory than Tom Hanks, an actor whose even keel and unshakable sanity seem geared to surviving all manner of trials? Having worked together on Captain Phillips, Hanks reunites with director Paul Greengrass for what might the year’s most diligently assembled movie.
As was the case with George Clooney in Midnight Sky, Hanks spends most of the movie in the company of a girl (Helena Zengel). Zengel’s Johanna has been living with the Kiowa people after they murdered her parents on their small homestead.
A bit of a wild child, Johanna speaks no English and barely remembers the German settlers who had been her family.
The movie's title stems from the unusual job that Hanks's character performs. Captain Jefferson Kyle Kidd travels from one town to the next where he reads selections from the nation's newspapers.
Kidd says that he hopes his readings provide a bit of uplift to hard-working folks who have no time for reading newspapers.
The movie's point is made explicit in the lives of both Kidd and the girl he's trying to reunite with her last remaining kinfolk. Each must come to grips with a painful past. Kidd saw the horrors of war up close and lost his wife to cholera during the fighting. Johanna must remember her life before being taken by the Kiowa.
Working with cinematographer Dariusz Wolski, Greeengrass creates a vision of a west that includes lonely open spaces and cramped towns with interiors lit by oil lamps. The disruptions of war have created a pervasive sense of rootlessness.
A peaceable soul, Kidd has had his fill of fighting. That doesn't mean that he won't use his rifle to stave off thuggish attackers led by a former Confederate soldier (Michael Angelo Covino) who wants to buy Johanna for less than honorable reasons. He's also shaken by the sight of a black man hanging from a tree, a victim of post-war racism.
Hanks, who stands as one of the last of cinema's beacons of decency, doesn't have to do much here. Bearded and warn, he's playing a character who clearly will overcome his reluctance and become Johanna's savior. For her part, Johanna proves resourceful enough to help when the travelers are under threat.
The story unfolds episodically. Early on, Kidd tries to persuade a couple (Ray McKinnon and Mare Winningham) to look after the girl. That doesn't work out. It's not until he meets the owner of a Dallas hotel (Elizabeth Marvel) that he's able to talk with Johanna. Marvel's Mrs. Gannet speaks the Kiowa language.
The movie's darkest moment arrives when Kidd and his companion meet a group of rogues who slaughter buffalo under the leadership of an obviously evil man named Farley (Thomas Francis Murphy). In what might be intended as political commentary about certain politicians who insist that all news about them be laudatory, Farley wants Kidd to confine his reading to self-serving testimonials from the local paper.
Eventually, Kidd finds himself in San Antonio where he meets with a friend (Bill Camp) from his pre-war life. He also visits his wife's grave and Hanks conveys the poignancy of a deeply sorrowful man.
These days, Westerns can be minefields for filmmakers when it comes to issues involving race and the treatment of Native Americans. News of the World seems neither revisionist in its outlook nor is the movie committed to the genre's most insistent cliches; it has the feel of a kind of middle-ground effort.
When a director tells a story consisting of serially realized  episodes, it's not easy to maintain a constant sense of vitality and for all its attempts at authenticity, News of the World can lose chapter-to-chapter momentum, an oddity for Greengrass whose movies (notably Bloody Sunday, United 93 and the Bourne movies) typically thrive on speed and pulse.
News of the World is another kind of effort, one that relies on Hanks to stake out solid ground as Kidd tries to save Johanna  and re-establish himself as what you may want to regard as the Walter Cronkite of the Old West.
With Hanks at the movie's center, the idea almost seems plausible.