B-movie maneuvers with an A-list cast 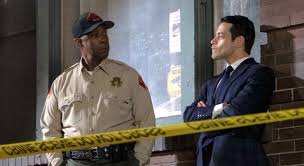 A thriller that evokes memories of other movies about cops and serial killers, The Little Things traffics in downbeat atmospherics with a thriller set in 1990s.
Denzel Washington, Rami Malek, and Jared Leto star in a story that has been vamped on and recycled so many times, it's difficult to see the movie as more than another genre exercise.
Looking paunchy, exhausted and gray, Denzel Washington plays Joe "Deke" Deacon, a Northern California deputy sent to LA to retrieve a piece of evidence.  As it turns out, Joe once worked in LA, a city he couldn't escape without tarnishing his reputation.
Once in LA, Joe teams with Jimmy Baxter (Rami Malek), an LA detective with a starched personality and a talent for getting himself on the news. Jimmy asks Joe to join him in trying to solve a string of murders, prostitutes who have been mutilated.
Enter Albert Sparma (Jared Leto), an LA refrigerator repairman who lives on the margins, walks with a waddle and has enough smarts to make for a tough interview when the cops haul him in for questioning.
With long hair that looks as if it hasn't been washed for weeks and a taste for strip clubs, Albert has prime suspect written all over him.
Washington has an uncanny ability to make us believe that any character he plays knows more than anyone else. He and Malek make a decent enough team, mismatched at first but increasingly on the same page.
The screenplay creates a predictable thematic link between Joe and Jimmy, building a connection around each's capacity for moral compromise. Joe was suspended from the LA force because he became obsessed with a case that shattered his marriage and put him in the hospital for triple bypass surgery.
Director John Lee Hancock (The Blind Side, Saving Mr. Banks) turns out a police procedural that peeks into the darkest corners of cop and criminal behavior -- not so much because it's curious but because the atmospherics demand it.
Even worse, the story falls short during the final act which finds Jimmy behaving  in ways that defy credibility.
The Little Things fulfills many of the requirements of a gritty genre piece, moving its characters through a world from which no one escapes uncorrupted, sort of a B-movie with an A-list cast and noir shading.
But with three Oscar winners in the principal roles, it's not unfair to have expected something more.
Posted by Robert Denerstein at 4:10 PM