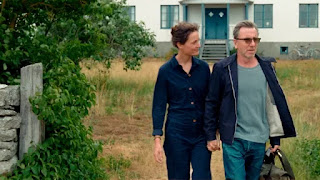 In Bergman Island, director Mia Hansen-Love travels to the Swedish island of Faro, the place where fabled director Ingmar Bergman lived and shot many of his films. Faro might be the last place filmmakers would want to work on scripts but Tony (Tim Roth) and Chris (Vicky Krieps) are both trying to finish screenplays.
Bergman casts a big shadow which can't be avoided on Faro, where guides conduct Bergman safaris. On top of that, Tony and Chris are being hosted in the house where Bergman filmed Scenes from a Marriage. That film, a guide wryly tells them, was responsible for millions of divorces.
Tony seems able to work and Chris stumbles, trying to write with a fountain pen that keeps running out of ink.
In a way, Bergman Island serves as a portrait of a relationship, a creative one that has hit some shoals. Tony and Chris don't even agree on Bergman's work. He hates The Seventh Seal, for example.
Hansen-Love also includes a film-within-the-film as Chris describes the movie she's working on to Tony. In that film, Amy (Mia Wasikowska) and Joseph (Anders Danielsen Lie) try to rekindle or shed what’s left of their former love. She seems more interested in a reunion than he. The movie further complicates matters because both characters have arrived on Faro for a wedding.
The story shortchanges Roth, focusing mainly on Chris and her screenplay. In a way, Chris’s creative life dominates.
I've read that Hansen-Love based the film on her 15-year relationship with director Olivier Assayas. It’s impossible to know what sort of relationship to reality Hansen-Love intended but, in part, the movie explores the tensions between an apparently successful male filmmaker and a female counterpart who seems to be trying to establish her profile.
The movie? Ambiguities and lack of sharp resolution work against satisfaction and neither character seems capable of making anything at Bergman's level -- not that it matters.
These characters aren't Bergman -- and that's probably the point.
They may be on the director's island, but this casually expressed movie left me wondering whether they weren’t marooned elsewhere.
Posted by Robert Denerstein at 3:35 PM