Too many ‘Eternals’ spoil this Marvel brew 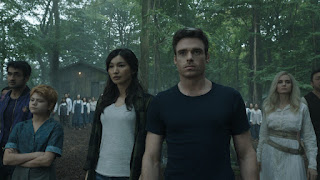 I saw Eternals a couple of weeks ago and instantly was struck by the inappropriateness of the title. Eternals? By the time I reached the parking lot, much about this overstocked comic book of a movie had faded into the hazy vault of dispensable memory.
About those Eternals. Each of them is endowed with a power that can be employed to save humans from monstrous, water-dwelling creates known as Deviants. In a reasonably engaging prologue, we learn that the Deviants were defeated centuries ago by the Eternals but now have returned to make the world Deviant again.
Er, no, they don’t really have a slogan.
The major news about Eternals takes us behind the camera. The movie marks the superhero debut of director Chloe Zhao, best known for the Oscar-winning and, in my view, somewhat over-rated Nomadland.
Watching a director with respected indie bona fides take the helm of a giant cinematic cruise liner breeds its own level of fascination — not to mention questions about whether two oppositional movie streams can co-exist.
I’m not sure Eternals answers the question, but it left me with two thoughts: Congrats to Zhao for securing what I hope was a major payday and for orchestrating a complex narrative.
Unfortunately, that narrative too often challenges coherence.
Zhao works with a diverse cast of characters in pursuit of big-screen thrills. Brian Tyree Henry plays a gay Eternal with a husband and a son; Kumail Ali Nanjiani, Don Lee, and Gemma Chan add to the mix. Salma Hayek portrays an Eternal with authority over the other Eternals.
Zhao shows that she can muster up impressive visuals. Some scenes look as if they might have been inspired by a John Ford Western, and there are references to Kubrick’s 2001. Other pulpy sights accompany this skewed mashup of mythological references.
Although there are ten Eternals, Chan’s Sersi comes closest to being a central character. Sersi tries to organize the unruly Eternals into defeating the Deviants, which also means saving humanity.
As the temperamental Thena, Angelina Jolie crops up from time to time, perhaps to remind us that she’s in the movie.
Nanjiani brings sparks of life to the proceedings as Kingo, an Eternal who has become a Bollywood star.
Lia McHugh appears as Sprite, a character of perky annoyance.
A love affair between Chan’s Sersi and Icarus (Richard Madden) adds a melancholic note while showing us that not all the Eternals are committed to truth, justice and the American way.
Oops. Wrong franchise.
Eternals is another product of the Marvel universe, which seems to be striving to be infinite, a never-ending galaxy of movies and characters.
Eternals may be the first superhero movie in which two men kiss and scenes in which dialogue dominates can be found. But Externals also wobbles under an expository burden that operates like tow ropes on a fractured narrative.
Moreover, a two-hour and 37-minute length can feel as if it might be an acknowledgment of the ages of the Eternal characters. Zhao has made a long movie that feels long.
I know I’ve omitted some of the Eternals and I should say that the movie might have been fun had the Eternals done nothing but show up at key points in human history, which is what early scenes promise.
If we’re lucky, Eternals will be a one-off. But don’t count on it. When Marvel makes a mess of a movie, it also drops seeds that seemed destined to sprout in some future multiplex harvest.
Besides, critics have little choice when it comes to the ongoing Marvel parade, so it pays to keep an open mind.
Posted by Robert Denerstein at 5:10 PM