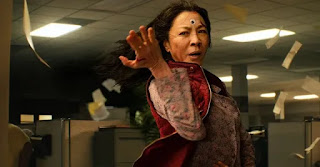 Daniel Kwan and Daniel Scheinert -- a directing duo known as The Daniels -- overwhelm the screen with the aptly titled Everything Everywhere All at Once, a movie that spends more than two hours racing through a multiverse in which characters suddenly morph into alternate versions of themselves.
It's impossible to watch the Daniels maneuver through the chaos without acknowledging their ability to crack visual jokes, rip through dense helpings of exposition, and commit to a full-scale creative bombardment of the audience.
Now, it should be said that there are people who will enjoy this teeming barrage of a movie precisely because the Daniels don't skimp on invention. But those who don't think that comprehension and creativity are mortal enemies may find themselves looking for guard rails.
No stranger to martial arts action, Michelle Yeoh plays Evelyn, a Chinese immigrant to the US who runs a laundromat with her husband (Ke Huy Quan). Quan, you may remember, appeared in The Goonies as a kid.
Mired in a listless marriage, the exasperated Evelyn tries to deal with a lesbian daughter (Stephanie Hsu) who, in one of the movie's alternate universes, assumes an entirely different identity.
If you see the film, keep an eye out for a character named Jobu Tupaki. Also watch for the giant everything bagel.
No, I'm not kidding, although the Daniels probably are — at least I hope so.
The Daniels seem to have dedicated themselves to the idea that quiet equals boredom. Blink and you'll be watching a fight scene in which Quan's Waymond turns a fanny pack into a weapon.
During a scene in a tax office, Waymond reveals a new side of himself, providing Evelyn with instruction about how to "jump" from her current life into a parallel one in which she's a martial arts maven with a mission. She’ll find additional identities as the movie barrels forward, including a stint as a movie star.
To further complicate matters Evelyn's visiting father (James Hong) never approved of her marriage to the feckless Waymond.
Other characters pop in and out of various universes. Damn the transitions, it's full speed ahead.
Sporting a puffy paunch, Jamie Lee Curtis turns herself into a sight gag; she plays a dictatorial tax auditor who's appalled by Evelyn's haphazard record keeping.
The Daniels (Swiss Army Knife) convert distraction into attraction -- or at least they try. In one alternate universe, the characters have hotdogs for fingers, for example. In another, Evelyn and Joy turn up as rocks.
And, yes, it does feel as if everything we're seeing is happening all at once. Serious issues morph into cartoon-like jests. Sure lines blur but don’t we all live in a state of disorientation? So what if the movie’s scenes play like an explosion of hyperactive production numbers?
Everything Everywhere All at Once will delight some and confound others as it offers a cafeteria-style variety of pleasures: a terrific costume here, a funny bit there, an ingenious fight in another place.
All frantic all the time, the movie gallops toward a conciliatory -- and I guess -- happy hug of an ending.
The trouble with this bumper serving of creativity is that the meal is not only glutted but served so fast, it's difficult to digest.
Somewhere up there on the screen, there's a movie. Maybe dozens of them. If this sounds like your cup of chaos, have fun. As for me,  I guess I still prefer my movies one at a time.
Posted by Robert Denerstein at 8:30 PM