‘The Menu’: a tasty satire about foodies 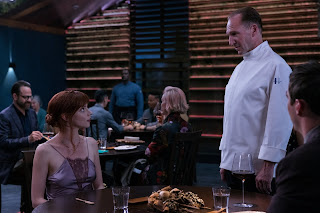 The Menu takes aim at restaurant obsessives, folks who'll pay a fortune to be served fashionably minuscule portions.
Price tags, however, are anything but small. The well-heeled or wannabes willingly open their wallets. In return, they're rewarded with super creative dishes prepared under the guidance of executive chefs who have attained celebrity status.
In The Menu, director Mark Mylod employs a strong cast -- led by Ralph Fiennes and Anya Taylor-Joy -- for a darkly hued comedy with an amply stocked side dish of horror. Food snobs beware, Mylod's coming for you.
For most of its one-hour and 46-minute run-time, The Menu serves its observations with a sharp satirical edge.
The movie owes much of its success to Fiennes, who plays Chef Julian Slowik, the culinary genius who presides over a restaurant so exclusive it's located on an island where all the food that's served is locally harvested. Diners arrive by boat.
When he introduces a new course to the assembled diners, Slowik claps his hands loudly and the kitchen staff -- visible to the diners -- snaps to attention.  Slowik has turned his staff into a paramilitary food force.
The only response to any question Slowik might ask: "Yes, chef."
The diners are a select group. John Leguizamo appears as an actor whose career has hit the downside. He arrives with his assistant (Aimee Carrero), a young woman who's ready to seek greener employment pastures.
Judith Light and Reed Birney play a couple celebrating their anniversary, although they don't seem especially happy about it.
Taylor-Joy appears as the date of a young man (Nicholas Hoult) who thinks he knows a great deal about food. Hoult portrays the diner who hopes to impress the chef with his vast food acumen. He's eager to genuflect at Slowik's culinary altar.
Diners also include a powerful career-making food critic (Janet McTeer) and the editor (Paul Adlestein) who publishes her work.
A table of young tech execs (Rob Yang, Arturo Castro, and Mark St. Cyr)  tosses around credit cards with the kind of abandon that lets everyone know they believe in their own sense of entitlement.
A memorably scary Hong Chau portrays the stern maitre d of the restaurant Hawthorne. She greets guests, gives them a quick tour of the island, and otherwise informs them of the rules by which they must abide if they're to get the most out of their dining experience.
The meals are amusing. A lone scallop served on a rock drawn from the sea, for example. Or how about a bread course distinguished by the absence of bread? The guests (only 12 are allowed) pay $1250 per person for the evening.
Aside from Taylor-Joy's outspoken character, most of the guests are pretentious jerks. The screenplay by Seth Reiss and Will Tracy leads these exemplars of privilege to their well-deserved, often violent comeuppances.
Fiennes makes an imposing dictatorial chef, who regards himself as an artist. Slowik instructs patrons that they must taste, not eat. People aren't eating meals, they’re sampling food conceptions, many mimicking the ambitions of “molecular”  gastronomy.
A study in austere modernism, restaurant Hawthorne isn't just a place to eat, it's the physical embodiment of rarified consumer aspiration, which is pretty much what the movie’s about — not exactly a theme on which to feast but sufficient for some tasty grazing.
Posted by Robert Denerstein at 2:10 PM

I found it to be the most original form of brilliance I have seen in a long time. I have seen some online not care for the end, but I found it more enjoyable of a conclusion than Triangle of Sadness. Kudos to all involved. I don't even care for horror, but this was wow.