Is this the U.S.? You may have doubts 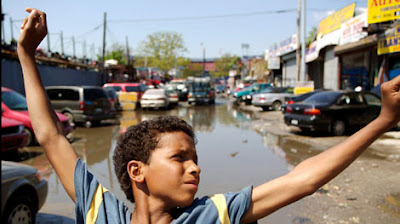 Summary: It may be early, but Ramin Bahrani's "Chop Shop" belongs on a short list of contenders for this year's 10-best films. Bahrani's clear-eyed, uncompromising movie asks us to consider an important question: How well do we know the country in which we live?

As my wife and I watched "Chop Shop," she leaned toward me and whispered, "This looks like the Third World." Her comment is only surprising because "Chop Shop" takes place in the Willet's Point area of Queens, N.Y. As depicted in the movie, Willets Point does look like another country, and as "Chop Shop" immerses us in its wild array of hand-to-mouth, improvisational living, we begin to accept the notion that post-War, Italian Neorealism can be meaningfully transported onto 21st century American soil.

"Chop Shop" -- Bahrani's first movie since 2005's equally impressive "Man Push Cart" -- tells the story of two kids who scramble to survive as they flirt with dreamy American entrepreneurial fantasies. A brother and a sister played by Alejandro Polanco and Isamar Gonzales have been left to their own devices. We don't know what happened to their parents, and we assume that some particularly cruel set of circumstances forced these kids into early independence.

A boy with a keen -- if not entirely realistic -- survival instinct, Alejandro occupies a room above an auto body shop where he does odd jobs and dreams of owning his own food truck. He invites Isamar to share his room and his dream. He has his eye on a dilapidated vehicle from which he believes they can sell food; he's saving money to for the purchase. She'll be the cook. It's crazy, of course, but Polanco's determination almost makes you believe he can pull off a miracle.

The movie remains in Willet's Point, an area cluttered with auto shops, some of which dismantle stolen cars, selling parts to folks who won't necessarily ask a lot of questions. Alejandro -- known throughout this forbidding neighborhood as Ale -- is a hustler, a good-spirited kid who has learned how to live on society's fringes: He hawks candy on the subway and steals hubcaps from cars in the parking lots of nearby Shea Stadium. He has knows how to make himself useful around body shops. His sister supports herself in ways that are less wholesome, selling oral sex to truck drivers who park their cabs in the area.

If "Chop Shop" were an ordinary movie, Alejandro would be torn between well-intentioned adults and evil exploiters who want to destroy him, but Bahrani wisely resists melodramatic temptation. He's not interested in blame, but in depicting the reality of neglect. That's why adults in the movie either can be callous or helpful and why Alejandro and Isamar mostly fend for themselves. If it weren't for Bahrani's camera, they'd be invisible, waifs lost in an island of spare parts and metal.

Tone is as important as content in Bahrani's work. He never allows sentiment to contaminate his movie, and he doesn't play harsh truths for shock value. But as the movie unfolds, Bahrani's young actors grab your heart and break it into little pieces. For these kids a chop shop isn't a single place, it's their whole world. And yet, there's something so innocent about Alejandro that you dare to hope for him, to believe that somehow he won't be crushed. As reflected in Polanco's performance, he has something that Barak Obama might applaud: Call it the audacity of hope.

The film, which has played selected cities nationally, opens in Denver Friday at the Starz FilmCenter, 900 Auraria Pkwy.
Posted by Robert Denerstein at 10:00 AM