Summary: "10,000 BC" travels a long way into the past in search of entertainment. It doesn't take much time for director Roland Emmerich ("Independence Day" and "The Day After Tomorrow") to prove that the trip wasn't worth making. 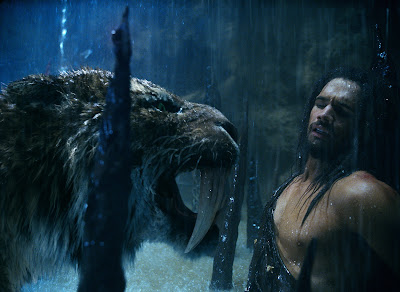 Here are some things you may not know about what life was like 10,000 years before Christ was born. First off, there was a whole tribe of folks who spoke English, although many of them had accents that seemed only vaguely identifiable. You also probably didn't know that prehistory could produce a movie that looks like a cross between a National Geographic spread -- circa 1950 -- a Joseph Campbell lecture, an Edgar Rice Burroughs pulp novel and Mel Gibson's "Apocalypto." Put another way, Emmerich has made a movie in which the greatest pleasures arise from the inadvertent laughter that results from portentous dialogue and an inflated sense of seriousness.

Me tell story now: The movie's main character -- D'Leh (Steven Strait) -- tries to save his girlfriend Evolet (Camilla Belle) who has been kidnapped by a band of cruel warlords. Along the way, D'Leh seeks help from a variety of other tribes, and Emmerich throws as many special effects into the mix as possible -- from giant woolly mammoths to what appear to be predatory ostriches.

All of this culminates at the headquarters of a Mayan-like civilization that enslaves its captives to build pyramids in scenes that look as if Mel Gibson's primal instincts have been channeled into Cecil B. DeMille.

Mythic mumbo-jumbo collides with computer-generated vistas, and the result is little more than grand-scale junk.
Posted by Robert Denerstein at 7:30 AM