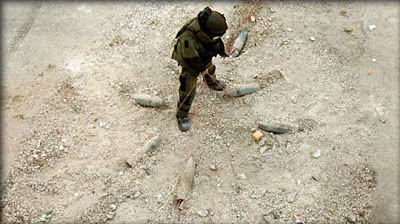 I look for Hurt Locker to blow up big on Oscar night. 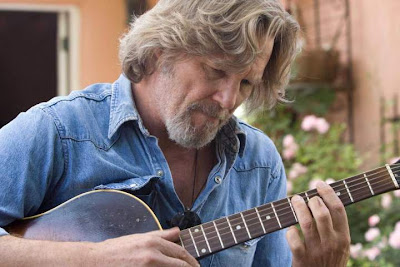 Jeff Bridges should have no trouble taking home Oscar gold. 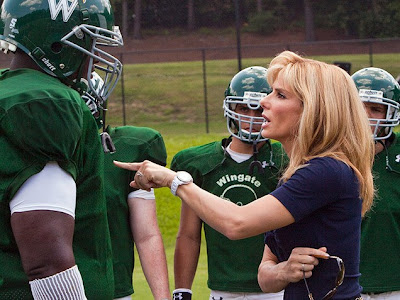 It pays to be bossy, if you're Sandra Bullock.


It's time for the fun game the whole family can play. We're talking about that international pastime and water cooler preoccupation known as Predict the Oscars. I try not to make too big a deal out of this annual exercise because the Academy of Motion Picture Arts and Sciences already makes a big enough deal out of the way it pats itself the back.

Besides, like just about everything else, Oscar has suffered from a bit of deflation. No matter how much the Academy of Motion Picture Arts and Sciences tries to hype Oscar, the program never will regain all of its luster. Why? For one thing, Oscar once provided a rare opportunity to observe movie stars in unscripted moments. In era of TMZ and a zillion other compulsive chroniclers of celebrity behavior, that possibility now seems old hat. The entertainment press has dragged the gods down off Olympus and, in many cases, the gods have been more than happy to participate in their fall – all in search of attention in an entertainment marketplace that's more crowded than a 19th century tenement.

To make matters worse, Oscar follows on the heels of a growing parade of previously televised award shows. It's still the big enchilada – the gold standard of awards – but by now its nominees have been seen on as many podiums as some hack Congressman up for re-election. I wish Oscar had shown its face prior to the Winter Olympics, not after. If the Academy had waited much longer, it could have given out the Oscars along with a generous helping of Easter eggs.

Award weariness aside, it falls to critics to predict the outcome of a race that has limited capacity to take our breath away – unless an obvious shocker jolts the proceedings, say, District 9 beating both The Hurt Locker and Avatar for best picture.

So here are my predictions in the major categories in a year in which I believe Oscar will spread its largess among a variety of pictures, most of them deserving. Tune in Sunday to see whether I'm in tune with Oscar or hopelessly out of touch.

Commentary: A Blind Side victory could emerge as a result of vote splitting among Up in the Air, The Hurt Locker and Avatar, but I'm thinking that director Kathryn Bigelow's white-knuckle look at an Iraq bomb squad will impress voters because it brought audiences close to fighting men in a war that generally has remained distant to the public. Also, it happens to be the best of the 10 nominated pictures. Avatar wins if the Academy decides that popularity, impressive 3D and a major “wow” factor trump everything else, a distinct possibility, but I'm still predicting victory for Hurt Locker.

BEST DIRECTOR
Who will win: Kathryn Bigelow
Who should win Kathryn Bigelow
Upset possibility: James Cameron for presiding over the complicated technological process that brought Avatar to the screen for a piddling $500 million.

Commentary: The best thing about Oscar (aside from whatever fashion disasters loom) will be the Academy's recognition for Bigelow, a director who happens to be a woman, but who never underestimates the visceral kick that movies provide. She'd be the first woman to win best director. Oh well, it's only taken 81 previous tries for Oscar to get around to recognizing that there are two sexes, and both can operate behind the camera.

I'm betting that Cameron will not prevail because Bigelow already won the prestigious Directors Guild of America award as the year's best director. If you take a second look (or a first if you haven't seen it) at The Hurt Locker, you'll discover that it's gripping, vivid and bolstered by superior performances from the trio of actors who played members of the movie's three-man bomb squad.

BEST ACTOR
Who will win: Jeff Bridges, Crazy Heart
Who should win: Jeff Bridges
Upset possibility: The biggest possible upset would be Jeremy Renner, who played an adrenalin-junkie GI who disarmed bombs in The Hurt Locker.

Commentary: OK, Crazy Heart was a little overrated, but it presents an opportunity to recognize an actor for current efforts and for an impressive body of past work. Conventional wisdom has it that Bridges' talents have been somewhat overlooked by Hollywood. I'm not sure I buy that, but I have no problem with him taking home a statue that I originally thought would go to George Clooney for playing a downsizing specialist in Up in the Air.

The moral of this story: It never hurts to play a drunk, especially one who sings country/western.

BEST ACTRESS
Who will win: Sandra Bullock, The Blind Side
Who should win: Carey Mulligan, An Education
If there's an upset: Meryl Streep.

Commentary: Bullock did a fine job in The Blind Side. Her portrayal of the single-minded Leigh Anne Tuohy captured audience hearts and allowed Bullock to dominate a movie about a woman who helped a young black man find his way into a successful football career. Still, the most subtle and revealing performance was given by Mulligan in An Education. She played a bright teen-ager who was seduced by an older man and managed to make it part of a 1960s rebellion against societal limitations on women.
It's a little weird to put Streep into the upset category, but Bullock seemed to have all the momentum going into the Oscar voting, and although Streep's portrayal of Julia Child -- the great popularizer of French cuisine -- in Julie & Julia was strong, she's already recognized as one of our best actresses. If the voters are feeling particularly frisky, they may just want to honor Gabourey Sidibe for playing the title role in Precious. I'm thinking that won't happen.

Commentary: Waltz's performance as Col. Hans Landa in Quentin Tarantino's Inglourious Basterds was chilling for its cunning, calmness and eerie politeness. Waltz created one of the scariest screen Nazis ever. The only way he loses is if voters decide that Plummer's wonderfully generous portrayal of Leo Tolstoy in The Last Station and the actor's age – he's 80 – merit recognition. It could happen because like us, the voters have seen all the other awards shows and may just want to assert their independence.

Commentary. It's possible that Mo'Nique, a comic by trade, is a one-trick pony when it comes to drama, but the self-justifying speech her character made in Precious was as riveting as anything I saw all year. Mo'Nique tapped into something scary, vulnerable and selfish; she made us understand the monster she was playing without condoning her cruelty.

BEST ORIGINAL SCREENPLAY
Who will win: Quentin Tarantino, Inglourious Basterds
Who should win: Mark Boal, The Hurt Locker
If there's an upset: There won't be one.

Commentary: I'm not one of the great fans of Inglourious Basterds, but I'll say this:. Tarantino writes some of the best scenes you'll find in contemporary movies. The opening scene of Inglourious Basterds couldn't have been better, and the movie had other scenes that were almost as good. I don't think Tarantino's brilliant scenes always add up to great movies, but if he wins, I'll be happy for him.

BEST ADAPTED SCREENPLAY
Who will win: Jason Reitman and Sheldon Turner, Up in the Air
Who should win: The guys who wrote In the Loop
If there's an upset: Precious: Based on the Novel 'Push' by Sapphire.

Commentary: I'm a big fan of In the Loop, a scorching satire about the way United States and Britain become involved in a war in the Persian Gulf. But Up in the Air, an adaptation of a Walter Kirn novel, is equally deserving. Reitman served up a mainstream entertainment that has something meaningful to say about the current economic chaos; Up in the Air secured Reitman's place as a director who knows how to entertain with wit and careful observation. I also admire the fact that Reitman refuses to waste his time (or ours) on fluff.

BEST ANIMATED FEATURE
What will win. Up
What should win: Fantastic Mr. Fox
If there's an upset: The Secret of the Kells.

Commentary: If The Secret of the Kells, which hasn't had much play in the United States yet, were to win, it would mark of the one greatest upsets in Oscar history. I thought Up, which began brilliantly, was a bit overrated, but that puts me in a distinct minority. I loved Fantastic Mr. Fox, Wes Anderson's extremely amusing adaptation of a Roald Dahl story; it was funny and boasted the best voice work of the year.

BEST DOCUMENTARY
What will win: The Cove
What should win: Don't have a rooting interest this year. If there's an upset: The Most Dangerous Man in America: Daniel Ellsberg and the Pentagon Papers.

Commentary: I see the possibility of an upset as extremely unlikely. The Cove was technically impressive and advocated for a good cause, halting the slaughter of dolphins in Japan.

BEST FOREIGN-LANGUAGE FILM
What will win: The White Ribbon
What should win: A Prophet
If there's an upset look for the Israeli film Ajami to emerge victorious.

Commentary: Michael Haneke's White Ribbon, a look at life in a German village prior to World War I, was slow-moving, creepy and well-acted. It also had the distinctive flavor of an art movie, thanks in part to its stark, black-and-white imagery. The Prophet, about the torments and brutalities faced by an Arab prisoner in a French prison, has more visceral power and made a stronger impression on me. It's a powerhouse of a movie.

So have at it, folks. Your guesses will be as good as mine. And, to tell you the truth, I hope a lot of my predictions are wrong. That will mean that Oscar night proved far more exciting than expected. Meanwhile, I encourage you to delve deeply into categories that I've bypassed. It's time for your predictions, complaints and anything else that's on your minds. Good luck, especially if you're in a pool. These days, every nickel counts.