'Remember' strains not to be forgotten 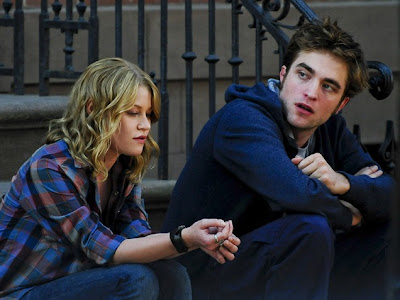 
What you think of Remember Me probably depends on whether you believe the movie’s emotional end justifies the mediocre means by which it got there. I’d vote no.


Teen-age girls who are enamored of Robert Pattinson, of Twilight-movie fame, may well cast their ballots differently, and, no, I can’t tell you any more about the ending, except to say that – in my opinion -- nothing that preceded it earned the payoff that obviously was being sought.


For most of its 113 minutes, the movie seems like a vehicle concocted to showcase the talents of Pattinson, who served as one of the movie’s executive producers. Freed from his duties as a vampire in the Twilight series, Pattinson proves more interesting, although he hasn't entirely made the transition from a willful outsider to a fully engaged human being. He’s playing an alienated rich kid who spends a lot of time smoking cigarettes, brooding and acting as if he’s seen every movie James Dean ever made.


The story revolves around a romance between Pattinson’s Tyler Hawkins and Emilie de Ravin’s Ally Craig. He’s the son of a wealthy businessman (Pierce Brosnan). She’s the daughter of a working-class cop (Chris Cooper).


Both have daddy on their minds. Tyler blames his father for his older brother’s suicide. When Ally was 10 – in 1991 – she witnessed her mother’s murder at a Brooklyn subway station. Not surprisingly, her father has a very protective attitude toward his only child.
Director Allen Coulter alternates romance and overplayed dramatic scenes, and the screenplay uses an embarrassingly old trick to set up the relationship between Ally and Tyler. As part of a vengeance scheme (never mind for what), Tyler begins dating Ally. What begins with deception quickly evolves into true love.


The movie gets sidetracked with a subplot about Tyler’s younger sister (Ruby Jerins), an artistic prep school student who has an especially close relationship with her big brother. Tyler’ s mother (Lena Olin) long has been divorced from his master-of-the-universe dad, who spends all of his time in his office where he’s evidently busy acquiring companies and making oodles of money.


As part of his rebellion against his father’s corporate preoccupations, Tyler has taken up residence in a ratty apartment he shares with his roommate Aidan, an annoying Tate Ellington.


You’d have to be reasonably hard-hearted not to be moved by the ending, but upon reflection, it struck me as a cheat, a shameless last-ditch effort to elevate a mediocre movie into something special.

A WORD OR TWO ABOUT OUR FAMILY WEDDING 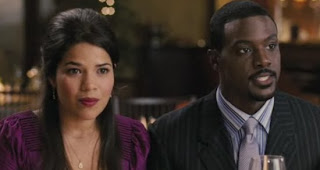 OK, this may be more than a couple of words -- but not much more. Our Family Wedding plays like the pilot for a sitcom that was rejected by all the major networks. What could have been a knowing comedy about the relationship that wariness between the families of a young black man (Lance Gross) and his Mexican-American fiancee (America Ferrera) devolves into ethnic shtick and stereotyping. Among other things, the movie may prove that Forest Whitacker, an actor whom I admire a great deal, doesn't really have the cops for comedy and that Ferrara, another talent, deserves better material. Director Rick Famuyiwa turns the movie into a kind of My Big Fat Mexican-American Wedding, a cacophonous blend of sentiment and misguided ethnic humor that can be painful to watch.