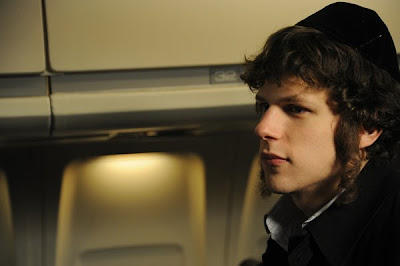 Sam expands his world, but in a disastrous way.

The milieu of the new movie Holy Rollers – Brooklyn’s Hasidic Jewish community – may be unfamiliar, but its story of corrupted innocence breaks little new ground. Director Kevin Asch turns the story into one of betrayed values, the stringent yet holy ways of the Hasidim. Hasidic Jews aren’t necessarily idealized, but they're used to set a clear moral standard in a tale about young Hasids who are duped into smuggling drugs. Orthodox becomes the yardstick by which to measure some very precipitous falls. The movie follows Sam (Jesse Eisenberg), a young Hasid, through a series of misguided adventures, while providing mostly uncritical glimpses of Hasidic life. Eisenberg (Adventureland and The Squid and the Whale) gives a strong performance as a young man who gradually awakens to the world of vice into which he’s stumbled. Justin Bartha portrays Yusef, a cynical Hasid who involves Sam in a crime ring run by Jackie (Danny A. Abeckaser), a secular Jew who plies his tempting girlfriend (Ari Graynor) with ample helpings of the Ecstasy he imports. Telling in many of its details, Holy Rollers ultimately devolves into a disappointing morality tale that doesn't do enough to penetrate the troubled psyches of Sam and his cohorts.

Posted by Robert Denerstein at 9:23 AM