Vulgar humor -- but with a bit of a twist 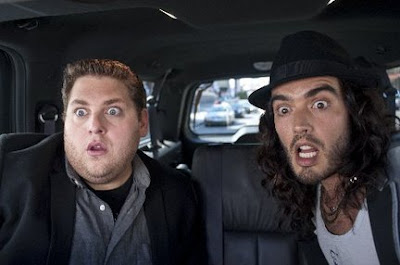 Get Him to the Greek may be an anomaly among comedies. The movie might actually be better when it's at its most serious. This ragtag gagfest about a rock-loving schlemiel (Jonah Hill) who's sent to London to escort a fading rocker (Russell Brand) to a 10-year anniversary concert at Los Angeles' Greek Theater has some daring moments.


Director Nicholas Stoller (Forgetting Sarah Marshall) makes Get Him to the Greek a richer dish than you'd normally expect from gross-out comedies, but doesn't neglect the kind of humor that's designed to draw a crowd. A running joke has Aaron repeatedly throwing up on himself. And there are other gags involving various body parts, including an airport scene in which Aaron is asked to stash drugs in a very uncomfortable place.


Oh well, you've seen these kinds of comedies before. You will see them again. The one thing Hollywood prizes as much as money might be vulgar humor.


Brand, who played a similar role in Forgetting Sarah Marshall -- the character even had the same name -- has the debauched rocker routine down cold. And Hill, who also appeared in Forgetting Sarah Marshall, does the job you'd expect from a chunky comic actor, who, in this case, plays an avid employee of a record company that's presided over by the maniacally dictatorial Sergio Roma (Sean Combs in a scowling one-note performance).
I don't know how he did it, but Stoller persuaded New York Times Nobel Prize winning columnist Paul Krugman to appear in a cameo, which becomes funny only if you realize how inappropriate Krugman's presence in such a movie is.
But ... and here's the key question ... is Get Him to the Greek uproariously funny7
Not entirely. It has laughs, of course, but I didn't find it fall-down funny, so I'd tag the movie as a medium-grade comedy with some unexpected flourishes and a willingness to shed comedy for moments that are more serious than sentimental.


If you really want to know how funny you think a movie is, see it by yourself or at a matinee when the auditorium is relatively empty. But that's not the way comedies are meant to be seen, you protest. You're right of course, but you'll get a purer idea of whether a movie makes you laugh when the guy in the next seat acting as a laugh track.


So apologies. Another mixed review, but at least this one is for a movie with a few interesting wrinkles, not the least of which is Aaron's dawning realization that the quickest way to challenge one's love for music is to land a job in the industry.

Posted by Robert Denerstein at 1:06 PM