A talky 'Twilight' misses the mark 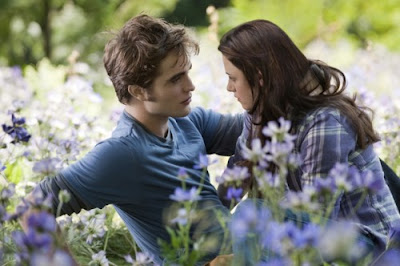 Robert Pattinson and Kristen Stewart. Is it really true love?

There are two possible audiences for the Twilight movies: the unsuspecting and the legion of fans who are intensely devoted to the books by Stephenie Meyer. Fans of the books bring their own judgments to the theater, and if the response of the teen and tween audience at a preview screening means anything, Eclipse - the third of the Twilight movies - contains enough oohs, aahs and applause points to keep the faithful happy.

The third installment tells the story of young Bella's choice: Should she stick with hunky vampire Edward (Robert Pattinson) or acknowledge her feelings for Jacob (Taylor Lautner), a muscular classmate who likes to run around shirtless and who also happens to be a werewolf.

Like the young vampires in the series, the Twilight movies have no real fangs. A brigade of newborn vamps may march; werewolves may leap on their prey; and Edward, who seems to be brooding less these days, may face off against his nemesis, but Eclipse has the kind of dry spaces that may challenge those who thus far have managed to restrain any impulse to climb aboard the Twilight train.

In essence, the story pits hot against cold blood. As those who follow the series know, Lautner's Jacob changes into a wolf the size of a Smart Car. He's hot blooded. By contrast, Edward's blood runs cold, as a vampire's should. He is, after all, no longer living.

Bella, a phlegmatic Kristen Stewart, is devoted mostly to Edward, who proposes to her at the outset. Edward won't sleep with her until they're married, and part of the marriage deal involves Bella becoming a vampire. Will she? Should she? Does anyone beside the already converted members of the audience have a rooting interest in the outcome? As directed by David Slade, The Eclipse also dredges up a revenge plot left over from the last installment. In their desire to protect Bella, Jacob and Edward form an uneasy alliance. During a blizzard atop a mountain, Edward - gentleman that he is - agrees to allow Jacob to warm the freezing Bella. Seldom has love known such sacrifice. Mostly, Eclipse is a two-hour talkfest that makes room for whispers of doubt: Is it selfish of Edward to want Bella to die so that they can spend eternity together? For his part, Jacob is sure Bella loves him - if only she'd admit it to herself. Does Bella really want to become a vampire? Does she understand that she'll be frozen in time with Edward, which - among other things - means the series could go on forever?

But here's the bottom line for me: I didn't care whether Bella chose Jacob or Edward. The idea of marrying either a dead person or a werewolf struck me as equally creepy. If my mother were around, she might wonder why Bella couldn't meet a nice human boy. What's wrong with humans? Not good enough for you?

Think about it. Romance trumps sanity if Bella becomes a vampire. Could there be a love so compelling that it's worth spending eternity as a high school senior? Exactly how many times can one take the SATs anyway? The movie flirts with some of these questions but can't quite give them the emotional poignancy they deserve.

Before seeing Eclipse, I'd heard rumblings that it was the best Twilight movie yet. The overall quality may be better here, but I enjoyed the lesser movies more because they gave the audience more opportunities to stomp and gasp. For me, the real fun of this somewhat tepid series comes from the crowd. The more the audience is into it, the more fun you have.

As for the uninitiated, all they need to know is this:

Forget the days of Bela Lugosi. In a time when terrorists have day jobs and live quietly among us, we no longer want to drive stakes through vampire hearts. We want to hold our monsters close. We want to co-exist with them, marry them, and, in the case of HBO's True Blood, have sex with them. We even imagine -- perhaps as a form of unacknowledged wish fulfillment -- that vamps have ethical standards and take them seriously. Because we seem to have so little control over real demons, we're doing our best to tame old fictional ones. It may not help with our real-life problems, but it provides a couple of hours of relief.