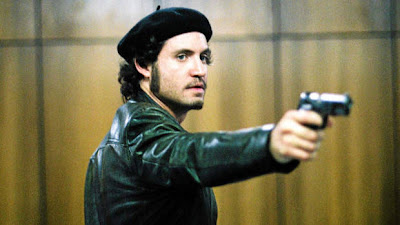 Quick tell me, who is Ilich Ramírez Sánchez?

I'm betting you don't remember that the man with this Russian-influenced name became known as Carlos, the Jackal, the Venezuelan-born terrorist who is now serving a life sentence in France for a triple murder. Carlos' violent accomplishments supposedly extended to 80 or so deaths during a 25-year span that found him working in Africa, the Middle East and Europe.

Before watching the movie, I took a quick refresher course on Carlos via some Internet browsing. Early on, Carlos plied his violent trade for the Popular Front for the Liberation of Palestine (PFLP). He led a 1975 raid on the Vienna headquarters of the Organization of Petroleum Exporting Countries (OPEC). Three people were killed during that operation.

After that, Carlos became a free-lance revolutionary, working for various governments who were interested in the kind of services that he provided. He viewed himself as a revolutionary; his employers may have seen him as a political hit man.

According to Carlos -- the absorbing 5 1/2-hour film by French director Olivier Assayas -- Carlos wasn't easy to know. Rendered in a truly extraordinary performance by the Venezuelan actor Edgar Ramirez, Carlos seems a man of great carnal appetites. He smoked and drank too much, and learned how to kill without disturbing his conscience.

He was a barrel-chested man who saw himself as a military leader, but seemed to make little separation between the causes that he served and his own out-sized ego. Late in the film, thinking that he's gotten too fat, Carlos has unwanted love handles removed with liposuction surgery. A vane revolutionary indeed.

Carlos, originally made for French television and shown in the U.S. on the Sundance Channel, is now making its way to specialized theatrical venues around the country. (In Denver, it can be see at the newly inaugurated Starz Denver FilmCenter, located at 2150 E. Colfax Ave. in the same complex as The Tattered Cover and Twist & Shout.) Eventually, it will be released on DVD, where you can watch it in more leisurely fashion.

Assayas, a director who seems to march to no predictable beat, has made telling family dramas (The Summer Hours), agitated oddball movies (Irma Vep) and global thrillers (Boarding Gate). Without doubt, Carlos stands as Assayas' most ambitious movie to date. The sheer number of locations, languages, and violent set pieces would be daunting for any director. Carlos' mini-sreies length, which allows for deep immersion in this foreign and often-frightening world, must have been a challenge, as well.

Densely populated by the shifting cast of characters in Carlos' life, the movie makes little attempt to explain Carlos, who seemed to be the kind of revolutionary who had no trouble enjoying luxury when it was available to him. Assayas, who admits to some fictionalization, gives us a portrait of Carlos in action, following his stormy career and allowing us to draw our own conclusions about it.

We certainly don't root for Carlos, but once we're inside his circle, we begin to see the ways in which violence became the norm for Carlos and those around him. While watching the movie, I was reminded of gangster films that bore deeply into criminal lives. Ramirez makes no effort to hide Carlos' brutal side, but we couldn't bear to watch if that were all of it: Ramirez also understands the way Carlos learned to attract others with charm, personal magnetism and even an unexpected capacity for courtesy.

In the early stages of his career, Carlos worked for and then found himself at odds with PFLP leader Wadie Haddad (Ahmad Kaabour). Haddad knew that Carlos could be a loose cannon and that he wouldn't easily submit to revolutionary discipline -- unless, of course, he happened to be enforcing it on others.

Carlos claims that he's fighting imperialism on behalf of the oppressed, but he seems to be most fulfilled when he's being treated like a celebrity of some revolution that most of the world failed to acknowledge. Could it be that Carlos simply craved notoriety and reveled in the power it gave him?

I'm not sure I know. I'm not even sure what conclusions can be drawn from entering the violent, murky world that Assayas so creates with so much immediacy. I do know that Carlos qualifies as an extraordinary filmmaking feat, a fascinating chronicle of the rise and fall of a man who seemed avid about devouring life while fully capable of destroying it.

Posted by Robert Denerstein at 7:51 PM