A thriller built from real events 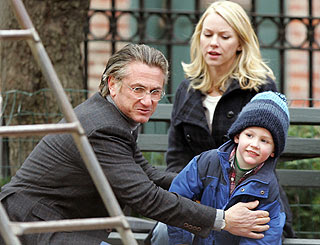 A family under duress in Fair Game.


In July of 2003, CIA agent Valerie Plame had her cover blown because of a complicated revenge plot hatched inside the Bush White House. Plame was outed in a column by the late Robert Novak, who said that he’d received his information from a couple of senior officials in the Bush administration.

Plame’s exposure – which endangered her and her contacts -- also happened to be against the law. It became a hot story for a time, and now has become the basis for Fair Game, a jittery Doug Limon thriller that casts Naomi Watts as Plame and Sean Penn as her husband, former ambassador Joseph Wilson.

Wilson had traveled to Niger on assignment for the CIA: He was asked to look for information about Iraq’s attempt to acquire materials used in making nuclear weapons. Wilson found no such evidence, but that didn’t stop certain factions within the Bush White House from pushing forward with a plan to invade Iraq, partly based on the assumption that Saddam Hussein possessed the now infamous weapons of mass destruction.

No need to reiterate the entire story, but some background is necessary before plunging into a review of Limon’s attempt to use Palme’s story as the basis for a movie that’s part thriller, part portrait of a strained marriage and part condemnation of the political maneuvering that allowed intelligence to be compromised for political purposes.

There’s no faulting Watts’ portrayal, which may constitute the best reason for seeing the movie. Watts’ plays a typical boomer mom. She’s overwhelmed by the demands of work, kids and marriage. The only difference between Plame and other suburban working wives is that she often leaves the country on sensitive and sometimes dangerous CIA missions in the Middle East.

Penn’s portrayal of Wilson proves slightly less successful, a portrait built on Wilson’s sense of self-importance and his justifiable outrage over what happened to his wife. Wilson seems the kind of guy you might not like, even if you thought he happened to be right.

When Plame and Wilson found themselves at the center of a turbulent news story, their marriage suffered. According to the movie, which is based on separate books written by Plame and Wilson, Plame was inclined to fly beneath the radar, even after her exposure. For his part, Wilson insisted on loud public protest at every turn.


Neither husband nor wife were entirely right. Limon (The Bourne Identity and Mr. and Mrs. Smith) wisely acknowledges the complexity of their situation, and his stylistic choices – frenetic hand-held camera work, for example – create the sense of anxiety that arises when people try to cope with fast-moving events over which they have little control.

Fast-paced and far from boring, Fair Game is nonetheless a bit unsatisfying, like being thrown into a whirling story that has difficulty settling down and which seems to end as quickly as it started. We’re left with the impression that we’ve watched a slick and avid gloss on events that had profound consequences for the nation and the world.

I felt that something more was needed, although I’m not entirely sure what.