Warm Bodies is formulaic in some ways and totally fresh in others. 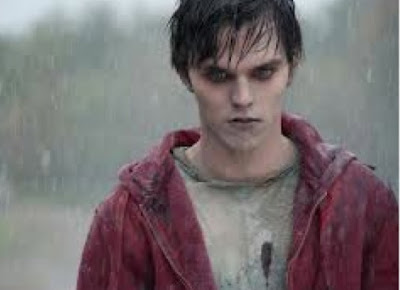 OK, maybe you haven't seen this scenario played out with a zombie, but you've followed similar patterns in a zillion other love-struck rom-coms.

Warm Bodies -- which just as well could have been called I Ate Her Boyfriend's Brains -- earns extra credit for embracing romantic cliches while avoiding a variety of others.

This mostly sweet-tempered movie also does a reasonably good job of delivering a "can't-we-all-get-along" message. In this case, "we" refers to zombies and humans living in a post-apocalyptic world of deprivation and scarcity.

The zombies in Warm Bodies' hang out at the airport of the unnamed city where the action takes place. They shuffle aimlessly through empty, litter-strew corridors, looking as bereft as travelers who've been told all flights have been cancelled.

When the zombies venture away from the airport, it's to feed on small parties of sustance-seeking humans.

The story centers on a zombie named "R," played by Nicholas Hoult, and a young woman named Julia, portrayed by Teresa Palmer. A lonely "R" rescues Julia after a feeding raid in which he eats her boyfriend's brain, apparently the best part of any human, although a couple of hours of watching Congress on C-SPAN might convince you otherwise.

Consuming the brains of others keeps zombies going, while allowing these otherwise memory-deprived creatures to experience the memories of the person on whom they've dined, a form, one supposes, of mental indigestion.

Most of the movie focuses on the relationship between R and Julia. Her life is complicated by the fact that her father (a staunch John Malkovich) leads the surviving humans in their battle against zombies. He hates zombies.

Because zombies have difficulty speaking, Hoult -- blood-stained, pallid and wearing a tattered hoodie -- generates pathos by playing a good deal of the movie as a nearly mute creature struggling to express himself. We do, however, hear R's thoughts, which are fluently spoken and mildly amusing. They also serve as the movie's voice-over narration.

Writer/director Jonathan Levine, working from a novel by Isaac Marion, seems more interested in offbeat romance than in dotting every "i" and crossing every "t," and he relies on the movie's well-executed production design to convey a feeling of post-apocalyptic rot.

Hoult and Palmer turn the movie into a pleasing fable about the way love can revive the dead, presuming you're willing to view death (as the movie does) in metaphoric terms.

Levine (The Wackness and 50/50) doesn't do nearly as well in trying to fulfill other genre obligations, say, horror. Skeletal creatures called Bonies become the major threat to both humans and zombies. Bonies have moved well beyond redemption. All that's left of them are bones and ravenous appetites.

Sprinkled with mild humor -- some of it from one of R's fellow zombies (Rob Corddry) -- Warm Bodies sometimes looks more serious than it actually is, but the movie's better than you'd expect for a zombie-human teen romance.

"Zombie-human teen romance? No, I can't believe I just wrote that, either.