Director Kathryn Bigelow takes us into a shadow world as the CIA hunts for Bin Laden. 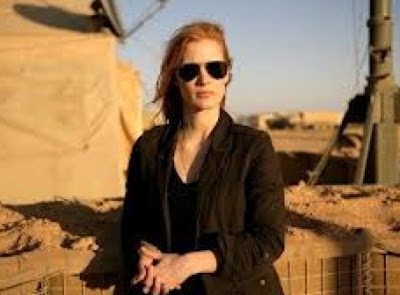 The trouble with reviewing a movie that's already opened in New York, Los Angeles and Chicago -- particularly one that has generated a fair amount of controversy -- is that informed viewers already may have burned out on all the surrounding arguments. In the case of Kathryn Bigelow's riveting Zero Dark Thirty, heated discussion has centered on early picture scenes in which a prisoner is tortured in hopes that he will reveal information leading to the capture of Osama Bin Laden.

A trifecta of senators -- Dianne Feinstein (D-Ca.), Carl Levin (D-Mich.) and John McCain (R-Ariz.) -- have accused the film of being "grossly inaccurate." Others have chimed in, saying the movie wrongly suggests that waterboarding and other forms of extreme interrogation led to information vital to locating Bin Laden.

I leave it to you to decide whether the film makes an argument for the efficacy of torture. I didn't think so. The captive who's being humiliated, waterboarded and shoved in a box only begins to spill the beans when he's treated well, fed decently and not humiliated. Is this a case of good cop trumping bad cop? I don't really know. Maybe the movie doesn't, either.

If I were going to quibble with Zero Dark Thirty, which I found seriously compelling and generally provocative, I'd say that it's most vulnerable for not taking a moral stance about many of the events that it depicts.

When I first saw the movie, the absence of such a clearly defined position bothered me; I kept wondering what Bigelow and screenwriter Mark Boal thought about the events they were depicting in the complex narrative they've assembled with skill and finesse.

But the more I thought about it, the more I began to feel grateful that Bigelow presents the material in ways that allow us to reach our own conclusions. I certainly didn't leave the theater thinking it was commendable that the U.S. tortured people -- and, yes, waterboarding certainly looks like torture.

Remember, though, the CIA's use of waterboarding was endorsed by some pretty high level politicians in the immediate wake of Sept. 11, 2001. Maybe you even felt that extreme measures were justifiable if they helped to prevent another attack.

For my part, I viewed Zero Dark Thirty mostly as a backstage drama to history. Bigelow won an Oscar for The Hurt Locker (2008), a film about a small squad that disarmed explosive devises in Iraq. Like that movie, Zero Dark Thirty presents us with a slice of reality that remains remote for most of us. It reminds us that in our consumer-oriented, mall-driven lives, few of us pay attention to the brutal realities that preoccupy some Americans, in this case numerous CIA operatives.

The movie's credit, it doesn't lionize its main character. Jessica Chastain plays Maya, a CIA agent whose persistence -- often in the face of stiff opposition -- leads to the killing of Bin Laden. Chastain's Maya, a CIA newbie, enters the movie when she's thrust into an interrogation that's not easy to watch. The session is being led by a seasoned CIA agent (Jason Clarke), a man who seems to believe that a certain amount of "dirty" work comes along with the job, but that not everyone can (or should) try to do it.

Loose limbed and comfortably informal, Clarke's Dan maintains that no prisoner will talk until he accepts the fact that his position is entirely hopeless.

Chastain has the good sense not to turn Maya into a conventional heroine. She's often at odds with others; she's insistent when she believes she's got the goods; and she seems to have no life beyond her CIA duties.

Instead of dwelling on Maya as a character, Bigelow makes her a lynchpin in a story that hopscotches the world, prying open the lid that normally keeps CIA activities under wraps.

Throughout, Chastain receives able support from a large cast. Stand-outs include Kyle Chandler, as the head of CIA operations in Islamabad; Jennifer Ehle, as a CIA veteran who, unlike Maya, has a family and a less obsessive view of her work; and James Gandolfini, as the head of the CIA.

Boal's narrative compresses the 10 years that preceded a SEAL team's foray into Pakistan, where Bin Laden was killed. Such concision is bound to result in omissions and maybe even some misrepresentations. But both Boal and Bigelow say that the movie has been thoroughly researched. And even if Zero Dark Thirty isn't 100 percent accurate, it serves as an intriguing catalog of the complex and often-troubling responses that have developed in a post 9/11 world.

To provide context, Bigelow begins with a dark screen. We hear snippets of real phone conversations from people trapped in the World Trade Center. We don't need to see the twin towers fall to be reminded that the grief and panic that followed 9/11 helped create the atmosphere in which the rest of the movie unfolds.

Don't get me wrong. Zero Dark Thirty is no faux documentary or even a ''docudrama." It's a dramatic recreation of events that provides an involving and detailed look at how the CIA worked to find Bin Laden.

It spoils nothing to tell you that Bigelow doesn't trump up the killing for extra kick, although the raid on Bin Laden's Abbottabad compound is plenty tense. After 10 years of sleuthing, interrogating, bribery, conniving, obsession, stretched ethics and internal CIA bickering, we wind up with one guy in a body bag. It's not exactly a triumphant moment, in part because just about everybody looks smaller when they're dead.

So, you decide whether it was all worth it. You decide how you feel about this shadow world of espionage, namely what you think of some of the means employed to achieve the goal of finding Bin Laden. As I've said, Zero Dark Thirty won't tell you how to feel, but it will, I think, demand that you ask some difficult questions.